Puranas mention seven most sacred Teertha Kshetras or places for pilgrimage, as a means of attaining Moksha. They are said to be: Ayodhya, Mathura, Maya, Kashi, Kanchi, Avanitka, Puri and Dvaravati. Names of some of these places have undergone change.

The sacred places are also the equivalents of seven Chakras (Nadis) in one’s body. In order to attain Moksha, one has to realize these Chakras in body, beginning at the Muladhar. The Chakras in the body are: Muladhar, Swadhishthan, Manipura, Anahata,Vishuddha, Ajna and Sahasrar.

What is the order of visiting Sacred Seven Places?

You commence your spiritual journey (Teertha Yatra) at Maya (Haridwar), the starting point.

Maya mentioned in the Shloka is ‘Mayapuri’ in reverence to Maya Devi in the present-day Hardwar.  Maya Devi is the Adhisthatri (presiding deity) of Haridwar. She is a three-headed and four-armed incarnation of Shakti. Maya or Haridwar corresponds to the Mooladhar Chakra situated at the base of the spine.

Kanchi or Kanchipuram has been a very ancient ‘Teertha Kshetra’ and has a number of temples. City of Kanchi has been mentioned in the Shlokas as, Nagareshu Kanchi, meaning Kanchi as best among cities. The temple complex of Kamakshi is an architectural splendour. Kamakshi is said to be the ultimate form of Lalita Maha Tripura Sundari (Goddess Parvati).  Kamakshi is said to grant everyone’s desire in just a single visit. Kanchi corresponds to the Swadhisthana Chakra situated just below the navel. The presiding deity here is Kamakshi, the goddess of kama or desire. Another important temple here is of Ekamranatha (Ekambaranatha) dedicated to Lord Shiva.

Ayodhya, is another ancient Teertha Kshetra, representing the Manipura Chakra (also known as city of jewels). This Chakra can be realized behind the navel (Solar plexus) and associated with warmth. Ayodhya is famous as the birth place of Lord Ram of Tretayuga, who was an Avatar (incarnation) of Lord Vishnu. Ayodhya means, that which cannot be destroyed.

Avantika (present day Ujjain) is related to the vishuddha Chakra that is situated in the throat region near spine. Ujjain is famous for the Jyotirlinga known by the name Mahakaleshwar. The present structure of the temple is said to have been built in 4th or 5th Century CE.

Kashi Kshetra famous for Vishvanatha temple complex is said to represent the Ajna Chakra situated between the eyes. This is also called ‘Jnana Chakshu’. It has been a very old tradition to pursue spiritual studies in Varanasi, the other name for Kashi Kshetra.

Dvaravati or Dwarka the submerged city is said to represent the Sahasrara. Dvaravati is described in Puranas as the capital of Lord Krishna. Presently, the town of Dvaravati or Dwarka is situated on the banks of river Gomti. The present Dwarakhadheesh temple in Chalukya style was constructed in 15-16th century. The present Dwarakhadheesh temple is also called the ‘Jagat Mandir’ (Universal shrine) or ‘Trilok Sundar’ (most beautiful in all three worlds), is a seven storied structure and appears as if raising above the sea.

Share on FacebookShare on TwitterShare on Google+Share on Linkedin 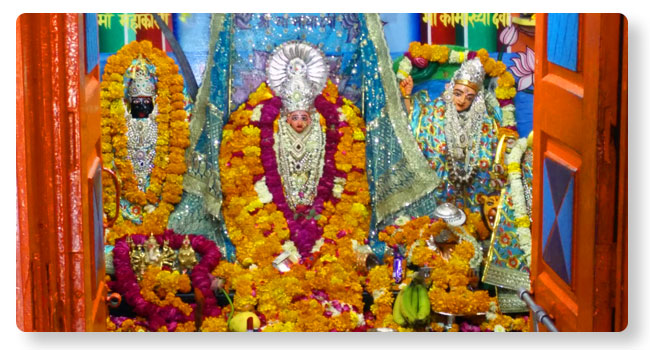