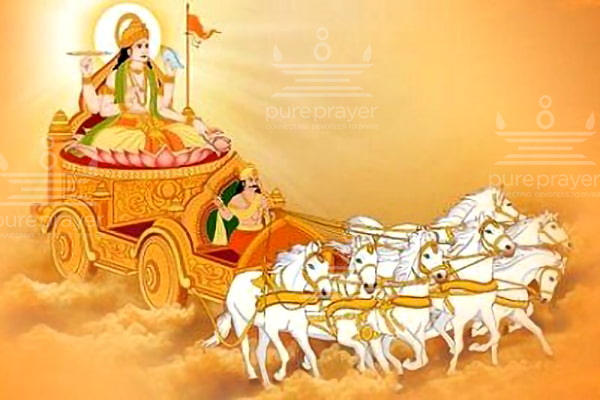 Ratha Saptamee is an important day in the Hindu Panchangam for performing Puja Rituals paying obeisance to Lord Soorya seeking his benevolence on the day of Maagha Shukla Saptamee in the Uttarayanam. This celestial celebration is also known as Achala Saptamee, Magha Saptami or Surya Saptami. Lord Surya called Vaivasvat was born on this day and hence, Ratha Saptami also gets the name of Surya Jayanti and Vaivasvata Manvadi. Ratha Saptami is being celebrated on January 28, 2023. This festival of Suryaradhanam has been in practice since the Vedic Age.

We celebrate Rathasaptami offering many kinds of Pujas, Havan, Homam and Yaag to Soorya. Aditya Sahasranaama Puja, Aditya Homam, Surya Namaskar Puja are some of the well-known offerings. Yogabhyasam involves performing 108 Surya-Namaskar getting up early on this day before the Day-break. This is said to increase our body energies like Ojas, Tejas and many others.

On Ratha Saptamee, the sight of Sun turning his journey on the chariot, which is driven by seven celestial horses, towards the north is clearly visible and that is why the day is celebrated as Rathasaptami.

Can you name recall the names of these seven Celestial horses?

They are called Gayatri (गायत्री), Brihati (बृहती), Ushnik (उष्णिक्), Jagati (जगती), Trishtup (त्रिश्टुप्), Anushtup (अनुष्टुप्) and Pankti (पङ्क्ती). The seven horses driving the chariot of Sun also represent the seven colors. The twelve spokes in the wheels attached to his chariot represent twelve months of the Hindu Panchangam beginning with Chaitramasam. The charioteer is called as “Aruna”, which also means The Dawn.

Everyone begins the preparations for this big celestial day cleaning up the household that can be related to Spring Cleaning. Rangavalli (Rangoli) is drawn using rice flour and other suitable safe materials like Haldi, Kumkum and others. An image of a chariot being pulled with seven colorful horses can be such a sight to behold.

Kindly visit our Facebook, Instagram or Twitter page and upload the images of Rangavalli or other special activity you performed on the day of Ratha Saptami to get your score of SQ (Sampradaya Quotient) flaunt it with your peers.

The merit of bathing at the time of Sunrise on Rathaspatami is equal to that of having bath during the days of Soorya Grahan (The solar eclipse). Botanically, Arkapatra means leaf of the Calotropis or Crownflower plant. Traditionally, seven leaves of crownflower plant are kept on the head, one after the other, and water poured on the head. Other variants are keeping the leaves on important points on our body as suggested in the Sampradaayam (Local Hindu traditions). This eradicates seven types sins, including the sins committed during previous births, say Shastras. The Shloka to be chanted at the time of bathing is as follows:

While it is prescribed that seven dips have to be taken in a holy river at Sunrise on Rathasaptami day, at least water should be poured for seven times on the head, keeping one leaf of Crownflower plant each time. Tilapishta means powder of sesame. Therefore, along with the leaf of Crownflower, a little quantity of sesame powder should also be kept on the head and water should be poured.

Sun God should be worshipped on the day, after having the traditional bath. An image of a chariot, symbolically representing the chariot of Sun God, should be drawn in front of the house, and it should be decorated with flowers.

After Abhyanjanam with Tailam (Sesame Oil) or Tilapishtam, Arkapatra should be place on the Head, Shoulder, Neck, Waist, thigh and feet or as suggested in the various traditions. Reminds you of a Nursery rhyme? Take your bath facing Surya Bhagavan in the east.

Worship should be offered to the chariot, invoking Sun God. According to another tradition, the one Arka leaf (Yekka in Kannada) each should be kept on the shoulders, one on the head, one each on the thighs, one upon the chest and one each on the feet while having bath. The positioning of the Arka leaves vary from one tradition to another.

Another shloka to be chanted at the time of having bath is:

Meaning of the Rathasaptamee Shlokam

Oh Rathasaptami devi, the beloved of Seven Horses, who is worshipped by the Seven Worlds, please destroy the ill-effects of sins committed in my last seven births, quickly.

Kushmandadaan means gifting of an ash gourd placed on a little quantity of uncooked rice. The ash gourd should be filled with valuables to the best of one’s capacity.

These traditions followed on Rathasaptami are said to be highly meritorious.

Importance of Lord Surya and Pujas on Ratha Saptamee

Our Puranas and Vedas are rich with many Stutis singing the virtues of the Sun God. One such important Stotra of Surya is Aditya Hridayam, even Lord Vishnu is said to have chanted in Ramavatar during Tretayug, when he waged a battle to give Moksha (Salvation) to the demon king Dashakantha Ravan. This was given to Lord Sriram by the great Brahmarshi Agastya. The five Pandava princes along with Draupadi are said to have pleased Surya Bhagavan as advised by Sri Krishna and had received the Akshaya Patram, a vessel that would fulfil their need of the everyday-diet during their Vanvas (A forced stay in forests).

A Vedic Age tale narrates how the son of a king called Yashovarman had offered many Pujas and homas pleasing Lord Soorya on the day of Ratha Saptami, that helped him overcome the many diseases and illnesses he had been suffering after he was born. If you are planning to wear a Manikyam (The Ruby– One of the Navaratnas) as a  remedial measure, Ratha Saptami is the most auspicious day as per Vedic Astrology. If Lord Soorya’s placement in the Janma Kundali (Birth-chart) is in a weaker position, then performing Sooryaradhan as per the advices by Vedic Astrologers on the day of Rathasaptami can be highly beneficial.

How many sons of Soorya Bhagavan can you name?