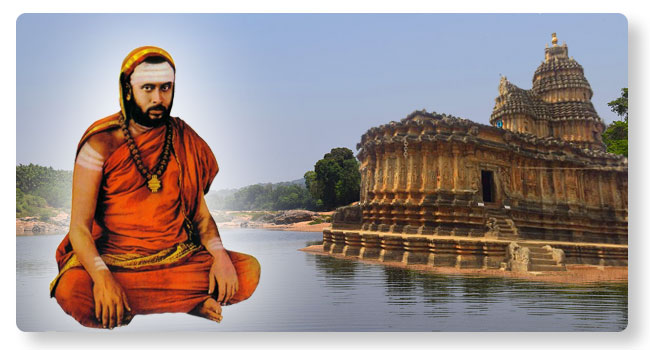 India is a Puja Room in the house of this great universe. India is blessed with a vibrant cultural heritage and a lineage of scholarly persons. Rishis, saints, ascetics, philosophers and outstanding scholars have taken birth in our country from time to time. Sri Adi Shankaracharya is one of the brightest luminaries in the annals of Hindu philosophy. The lineage of outstanding saint-philosophers adorning the Sri Sharada Peetha of Sringeri has only been kept alive with all grandeur and illumination. Sri Chandrashekhara Bharati, the 34th pontiff in that lineage, was one such outstanding person, who displayed miracles, involuntarily, on several occasions.

Narasimha Shastri (former name of Sri Chandrashekhara Bharati) was born in Sringeri to the devout and pious couple, Smt. Lakshmamma and Sri Gopala Shastri on the Sunday of Ashvayujamas, Bahula Yekadashi, in the Nandananama Samvatsara, October 16, 1892. This brought a lot of happiness and delight to the household. Narasihma Shastri was an ardent devotee, a pious person and a very silent person during childhood days. He showed an inclination towards traditional, spiritual and Vedic studies than academics, though he excelled in both. He was taught by Maha Mahopadhyaya Vellore Subramanya Shastri. He also studied under Maha Mahopadhyaya Sri Virupaksha Shastri during his schooling in Bangalore.

When the Maharaja of Mysore requested young Narasihma Shastry to ascend the Sri Sharada Peetha in Shringeri following the demise of Sri Narasihma Bharati Swamigalu, the former only said: “Do not load me with the administration of Sri Mutt. I will be confined to spiritual pursuit and nothing else.”

He was ordained into sainthood on Chaitra Bahula Navami during Paridhavi Samvatsara in April 7, 1912.

When he felt that the affairs of the Mutt required attention, the Jagadguru designated Sri Srinivasa, as his successor and ordained him into sainthood and named him as Sri Abhinava Vidya Tirtha Swami on May 22, 1931. The junior seer was proficient in learning and very soon gave considerable relief to the Jagadguru.

Once, he went to Devakottai in Chettinadu of Tamil Nadu as part of Vijaya Yatra. The region was suffering from severe drought. Organisers, who had arranged for the visit of the seer, were thinking of shifting the venue solely for the drought conditions prevailing there. However, Sri Chandrashekhara Bharati went there and began reciting the Virata Parva of Mahabharata, along with the Pandits there. The same afternoon, it rained so much for nearly four hours that the organisers appealed to the seer to stop the downpour. The seer ordered for performing the Mangalarati and the rain stopped. By that time, all the small and big ponds and streams were overflowing.

Once, when he was offering worship to Chandramoulishwara, a big cobra came in, causing consternation and fear to devotees assembled. The seer extended a cup filled with milk to the cobra. It consumed all the milk and slithered away.

The Jagadguru decided to liberate himself from the corporal body. On Sunday, September 26, 1954, the No Moon Day (Mahalaya Amavasya) of Bhadrapada Krishna Paksha in Jaya Nama Samvatsara. The anniversary of the day is performed on the Mahalaya Amavasya (No Moon day).

PurePrayer is a leading online platform offering Purohit Services of experienced and Vedic Pandits in all the Metro Cities of India like Chennai, Delhi, Gurugram, Hyderabad, Kolkata, Mumbai, Mysuru, Pune and many others as well as in Teertha Kshetras across India. We provide the services of Bengali Pandits, Hindi Pandits, Kannada Poojaris, Kashmiri Pandits, North Indian Pandits, Tamil Vadhyars, Telugu Purohits, Marathi Guruji, Malayalam Pandits, Oriya Pandits and many more. Pandits are available in Offline or Remote support format.