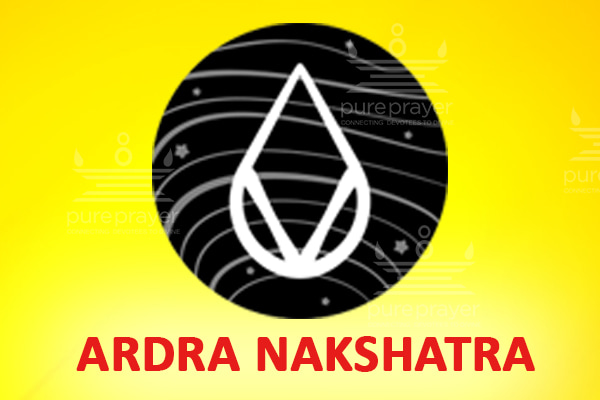 Arudra Nakshatra Darisanam or Ardra Nakshatra Darshan is a very ancient festival performed in the Pacha Maha Sabha Temples of Lord Shiva in Tamil Nadu. This is also called Thiruvadirai.

Arudra Nakshatram, which is also known as Thiruvaathirai Nakshatram, during Maargazhi Masam is considered highly auspicious. On this day Arudra Nakshatra also coincides with Pournami. Thiruvadirai festival is celebrated in all the Shiva temples with Natarajar Sannidhi (Procession Deity of Lord Shiva in the Cosmic Dance). Lord Shiva being Swayambhu, has no birth and hence there cannot be a Birth-Star or Nakshatram to denote birth. Only the Avataars can have as such, Punarvasu for Sri Rama, RohiNII for Sri Krishna, Swati for Narasimha, ShravaNa for Vaamana etc. Lord Shiva’s fond star is ascribed to be Aardra (Thiruvaadirai). Thiruvadirai takes place on the ninth night of the Eleven-Day festival.

Elaborate Abhishekam is performed to Nataraja with sugandha dravyam in the early hours of Margazhi Ardra, which falls on January 6, 2023 this year.

This verse from Sri Rudram in the holy scriptures of Vedas, emphasises Advaitam that Shiva is the Court (Sabha) and is also the leader of the court (Sabhapati). Lord Nataraja is also known as Sabhapati or Sabhanaayakan.

Cosmic Dance of Shiva as Nataraja

Lord Nataraja, the cosmic dance form of Lord Shiva gave Darshan to Vyaghrapada Muni on this day, at Chidambaram. The Lord assumed the Dhamaru (Udukkai in Tamil), Agni (Fire), Gaja (Elephant) & Kritti (Tiger skin) and Sarpa (serpent) as his icons and jewels, on this Margazhi Ardra day, while displaying his vigorous dance form. Nataraja, the Cosmic Dancer, dancing his five activities Creation, Preservation, Dissolution, Illusion and Salvation. Lord Nataraja in bronze form is present in almost all ancient Shiva temples which follow the Shaiva Aagama, starting from Sri Kalahasti in Andhra Pradesh till Kanyakumari. Goddess Sivakaami, stands next to Nataraja in a humble pose because the Lord defeats her in the dance duel.

Arudra Nakshatra Darisanam or Tiruvaadhirai Nakshatram of Tamil Margazhi(Dhanur) month is when Chidambaram Nataraja Temple wears a festive look. Chidambaram is regarded as the headquarters of all Shiva temples in Tamilnadu and is addressed as ‘Koil’ which means ‘The Temple’. Though the temple has a Moola Shivalinga, the Utsava Murthy of Nataraja, also known as Sabhanaayakan, is well known. Lord Nataraja has a golden roof called Ponnambalam. This Ponnambalam roof has minutely carved tiles which number to 21,600 tiles. 21600 is the number of times a human breathes in a day, as per Siddha medicine.

Chidambaram Nataraja represents Akasha Tattva (Space) of the Panchabhootas (five elements). Next to the Nataraja sanctum, there is a secret compartment behind a screen. During Arati, the priest opens this curtain and shows the secret chamber which is packed with air inside and quickly closes back the curtain. This chamber is known as Chidambara Rahasyam. Many spiritual secrets are contained within this huge, splendid Thillai Nataraja temple.

Shiva bhakta saints (Followers of Lord Shiva) like Manickavasagar, Nandanaar attained Mukti with their bodies turning into a blinding light which disappeared into the idol of Chidambara Nataraja Swamy.

Nataraja in the International Arena

Interestingly, an idol of Lord Nataraja is placed at the entrance of the world’s most popular Nuclear Research Center, CERN (Conseil européen pour la recherche nucléaire) in Europe. This is to represent Nataraja’s cosmic dance as the movement of the subatomic particles.

This is the most popular among the Pancha Sabha Temples. It is known as the Ponchabai or Kanaka Sabha Temple (Golden Court) due to the golden roof.

The day before the night of the abhishekam on the 9th day of the festival, Sri Nataraja and his consort Parvati, are carried by the Deekshitars and the devotees from the sanctum sanctorum of the temple to the great festival chariots, ready and waiting for them in the East Car Street. In the evening the Deekshitars and the devotees carry the procession deities of Nataraja and Parvati to the Raja Sabha, the Hall of Thousand Pillars, situated in the north-eastern part of the temple. This hall represents the Sahasraara Chakra, the energy point at the top of the skull described as a lotus with a thousand petals. He faces towards the south, the only deity to do so. With his right hand, the Hand of Abhaya (Assurance), he dispels the fear of death for the humanity.

In this ancient temple in North Tamilnadu, the Nataraja idol bears a very unique pose of his left leg lifted all up, above his head. During the dance competition between Shiva and Kali, Shiva dropped his earring to the ground, picked it with his left foot and fixed it back to his ear using his toes. Kali couldn’t replicate what Nataraja did and accepted defeat. This temple is called the Ratna Sabhai and Nataraja here is called Ratna Sabhapati.

This world famous temple is called the Vellichabai (Silver Roof) and has beautiful Nataraja-Sivakami idols.

This popular large temple in the far south of Tamilnadu is called Thamrachabai which means Copper Roof.

This beautiful temple situated right on the popular Courtallam waterfalls in South Tamilnadu, is called Chitra Sabhai. Elaborate murals of Puranas are engraved within the Chitra Sabhai chamber.

This temple is regarded as the first Shiva temple in the world, as per Shaiva Puranas. Situated in the Ramanathapuram district enroute Rameswaram, this ancient temple has a rare Marakata (emerald) Nataraja idol. The waters from the Abhishekam of this beautiful green Maragatha Nataraja statue, is believed to cure many diseases.