Book the best Vedic and experienced Pandit / Purohit / Panthulu / Vadhyar from Pureprayer for performing the Shashtiabdapoorti (60th Birthday) or Shashti Poorti Ceremonies as per your tradition.

Shashtiabdhapoorti or the 60th birthday / marriage anniversary / Ugraratha Shanti is the celebration of completing sixty years based on the Jamna Kundali (Birth Chart) and on the day of birth-star. A milestone in life. As per Vedic scriptures, man’s life span is believed to be 120 years. Sixty years in Sanskrit is known as Shashtiyabdhi. Shashtiabdapoorti marks the completion of half the life of one’s lifetime. Hindu calendar system has individual names for sixty Samvatsaras. The occasion of Shashtiabdapoorthi marks the completion of one such cycle. The sages and the rishis of vedic times have acknowledged the sanctity of the sixtieth year in one’s life and have drawn out elaborate rituals to mark this special event.

The Shasti Poorti celebrations in modern times have two important aspects Shanti and Kranthi. The rituals by Shanthi goes by the norms prescribed in the shastras, while the Kranthi is purely conventional in nature. Yamadharma (God of death) comes riding in a chariot called ‘Ugra Ratha’ at this juncture of sixty years.

Shanthi – The rituals carved out as part of Shanti are also referred to as Ugraratha Shanti. Shanti is a prayer sent to the heavens to make the post–sixty span a spiritually fulfilling experience. Shanti should be performed in the same year, month and on the same day of the birth according to the Indian Zodiac.

A Shantikarya has to be performed to mark this milestone and offer gratitude for the life given by God. During this Sandhikala, on the day of birthstar, homas, Japas and Pujas are carried out to bless the person. On this occasion, all the gods of sixty Samvatsaras, stars, Chiranjeevis, Kuladevata, Ishtadevata, seven seas, seven sacred rivers, Dwadasha Rudras and Dwadasha Adityas are offered Pujas and venerated for their blessings.

Kranthi – After the successful completion of “Shanti” programme, the Kranthi programme follows in which “Kalyaanam” is very important. “Kranthi” means “to step ahead” and signifies heading towards a new life.

In recent days, children started doing this ritual to their parents, just as their parents performed all of their rituals in their childhood.One more important aspect of Shashtiabdhapoorti is that all the planets in the zodiac come to the same positions or occupy the same houses of zodiac as compared to the actual date of birth of the individual. These planets take the same position as they were on the date of birth of the individual after 60 years.

Pureprayer offers Sashtiapdapoorthi, Bheema Ratha Santhi and Sathabhishekam services at the place of your choice, such as Thirukkadaiyur in Tamil Nadu performed by Vedic scholars (Tamil Vadhyars) who can speak multiple languages, including English, Hindi, Tamil, Telugu and many more.  Our representative will be present all along to guide you upon arrival. The package also includes the Purohit charges & Puja Samagri.

What is meant by Shasti Poorti?

Shashti Poorti or Shashtiabdapoorti is celebrated on completion of 60 years of age of the male. In Sanskrit Shashti means sixty; abda–year; poorthi-completion. Considering a human’s life span is about 120 years, It marks the completion of half the years of one’s lifetime as in Hinduism.

How is Shashti Poorthi celebrated?

The ceremony is more or less a repetition of Wedding Rituals, the couple celebrating the ritual repeats their marriage vows; exchanging garlands (malai marral), Mangalya Dharanam (tying of the mangalyam) and taking Manthra Snanam with the water blessed with the udhaka sayana manthras.

When should we perform Shastiapthapoorthi, the 60th birthday puja?

Shastiapthapooti is celebrated only when both the husband and wife are alive. Its usually celebrated when the husband completes 60. It’s called arubatham kalyanam, meaning 60th wedding anniversary or 60th marriage anniversary.

Which temple is famous for 60th marriage?

Thirukkadaiyur Temple, near Mayiladuthurai / Chidambaram in Tamil Nadu, India, is specialized and famous for conducting the 60th Birthday Ceremonies known as Shashtiabdapoorti, Shashti Poorti or Ugraratha Shanti. Thirukkadaiyur is about 50Kms from Kumbakonam.

What is meant by 60th year marriage in Hinduism?

What is the cost for Sashtiapthapoorthi?

What to gift for 60th wedding anniversary?

If you are planning to attend the 60th wedding anniversary, then giving a silver lamp or vastra to the couple are seen as auspicious gifts.  The man can be given the traditional silk dhoti and Angavastram while the lady can be given silk saree for the occasion. 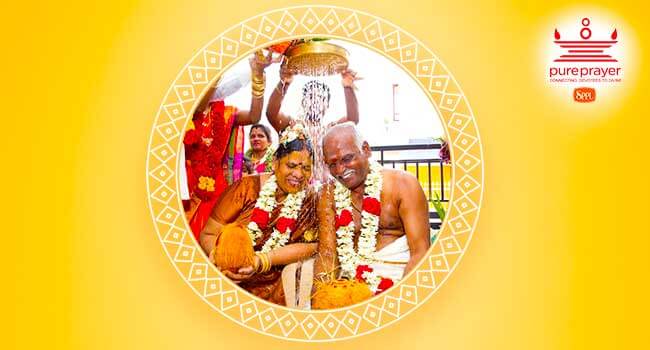