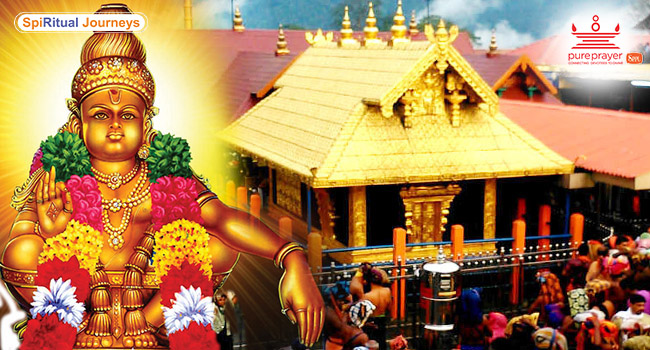 Sabarimala Ayyappan Temple Yatra is a popular choice of Spiritual journey you will be taking up for a Darshan of Swamy Ayyappan, who is also known as Dharma Shasta.

You will travel to Sabarimala temple, situated among the eighteen hills. Sabarimala is situated about 1574 feet above the sea level and surrounded by dense forests. The picturesque journey through the woods crossing many rivers and sacred places can be a rejuvenating experience to you and brings a sense of spiritual contentment too.

According to Puranas, Swamy Ayyappan was born out of union of Lord Shiva and Mohini, an incarnation of Lord Vishnu that took place during the Samudra Manthan (Great Churn). A legend about Ayyappan is that, he was found in the woods as a child in the forests by a king of Pandala region. He renounced the kingdom and the world, after fulfilling the promise of getting the milk from a tiger.

Sabarimala temple is open during the Mandalapooja, Makaravilakku and first five days of Malayalam months every year. Devotees take up a pledge with Irumudi or Irumudikettu, vowing to visit the temple and climb the eighteen steps known as padis.

You will be visiting Guruvayoorappan Sri Krishna temple in Thrissur for an early morning Darshan. This is also called Dwaraka of South. The image of Lord Krishna in standing position with butter in the hand is sure to capture your mind. Best time to visit Guruvayoor is from October to March.

Maximum pilgrim visits are during the months of November to February, as the climate is pleasant. However, many pilgrims also choose to visit during the first five days of every Malayalam month. Also the months from April to September are suggested for Sabarimala Ayyappan Temple Yatra.