Madurai Meenakshi Temple
×
You have logged in successfully
Thank You
()
cart 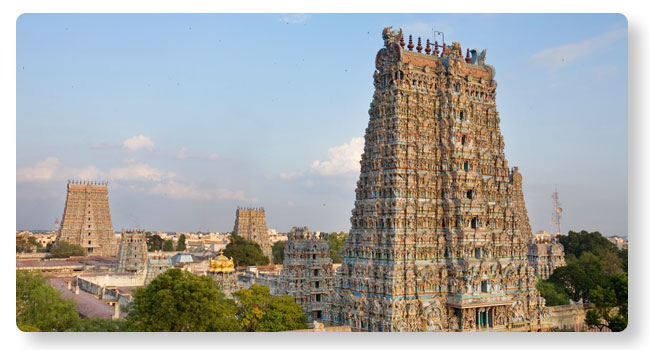 How Madurai came into existence:

A legend connects the story of Lord Indra, Lord Shiva and the Pandian king Kulasekaran. Lord Indra had to vacate heaven after the killing of Vritrasur and found peace and solace after worshipping a Shivalingam in the ‘Kadambavanam’. He built a small shrine to Lord Shiva. A merchant in Pandian’s kingdom discovered the small shrine in the woods of Kadambavanam. The king, after hearing the story, ordered the construction of large temple and a city around it for dwelling. Thus, the city of Madurai came into existence.

Another beautiful story about this temple claims that Lord Shiva known as Sundareswarar was the son-in-law of the ruler and how he created the Vaigai River. His daughter was said to be an incarnation of Parvati.

Meenakshi or Goddess Parvati is said to have given her Darshan three times. Malayadhwaja Pandian and his consort Kanchanamalai is said to have performed Putrakameshti (Yajjna desiring an offspring) and received Meenakshi (one with eyes in the shape and movements like a fish) as their child. Lord Shiva is said to have proclaimed, that he would come down to earth seeking the hand of their daughter and be their son-in-law. Poet Kumaraguruparar is said to have had Darshan of Meenakshi when his literary works were presented to the public. Rous Peter, a collector and in-charge of the temple during the British rule, is said to have been saved by Meenakshi as a small three year-old girl. Rous Peter is said to have made a contribution to the temple in the form of Padukas (stirrups, a footwear) to the Utsavamurthy (image of goddess for procession) made of gold and studded with rubies. This is brought out during the festival of ‘Chittirai Thiruvizha’.

Why you need a day’s time to see Meenakshi temple?

Plenty of time is needed to see the Meenakshi temple. You will want the architecture to sink in and get a feel of the ambience. The sculpture and paintings are captivating. The events or celebrations in the temple complex are something to cherish for a long time. Blessing from the temple elephant with his trunk, monks with heady incense, the devotees taking procession or many such are likely to leave an indelible mark in your memory. Fridays in this lively temple can be delightful, day or night!

The procession of ‘putting Shiva to bed,’ an everyday activity at the temple when, Lord Shiva and Parvati end up in the Antahpuram (Night place) and the sight of Aayiram Kaal Mandapam, is totally enchanting at night.

More info on the temple:

Madurai Meenakshi temple complex occupies a total area of 45acres (180000 Sq.m.) and is like a small town in itself. This structure was reconstructed in 12th Century CE, and seen development continuously thereafter. Separate shrines for Meenakshi and Sundareswarar have been built. The complex has four gateways and houses fourteen Gopurams (Towers). The Meenakshi temple also includes deities of Lakshmi, flute playing Krishna, Rukmini, Brahma, Saraswati and many more. Many walls are adorned with paintings and sculptures. Mukuruni Vinayakar is a huge single stone image of Lord Ganesha that was found during the excavation for water tank. This has been installed in the Mantapam. The water tank here is called Pondamaraikulam (Golden lotus pond). The temple complex has five Sabhas (Halls) dedicated to various deities. A huge Nataraja has been housed in one of the Sabhas and the dais is clad with silver. This is fondly referred to as Velly Ambalam. Sri Nataraja here, is in the posture with his right foot in the air contrary to other images elsewhere. “Ayiramkaal Mandapam” (Canopy of thousand pillars) built during 16th Century CE was a contribution of Aryanatha Mudaliyar, the prime minister of Vishwanatha Nayak, a ruler under Vijayanagar Empire. The stone pillars numbering 895 are marvelous works of art. Musical pillars have been erected in the western side of Mandapam and produce musical notes when tapped. In the Chaitramaasa of Tamil calendar, Kalyana Mahotsav for Goddess Meenakshi (Parvati) and Sundareswarar (Lord Shiva) is performed with great pomp and glory and is celebrated as a ten-day event. Some of the festival dates celebrated here include, Pongal in the month of January, Maha Shivaratri in Phalgunamaasa, Chaitramaasa of Tamil Calendar, Navaratri during Ashvayujamaasa and Deepavali during Kartikamaasa.

What is Nearby Meenakshi temple?

Azhagar Kovil is about 21 Km from Madurai. This Temple is dedicated to Lord Vishnu (Alagar or Azhagar). The temple is situated on a hill with a panoramic view. The hill is known as Solaimalai. The temple also contains beautiful carvings. Palamudirsolai, one of the six abodes of Lord Subramaniya is located atop the hill.

One of the six special abodes dedicated to Lord Murugan or Lord Subrahmanya is located 8 Kms from Madurai in Thirupparankundram. This is popular as Aruppadai Veedu. The importance of this temple is that the marriage of Lord Subrahmanya with Devayanai, the daughter of Indra, was celebrated here. The cave shrines here are thought to have been built during 8th Century CE. The Sanctum Sanctorum has been carved out of a single rock. The walls and the pillars have fascinating carvings.

Thirumalai Nayak Palace is at about 1.5 Km from the Meenakshi temple in Madurai. This palace was built in 1636. The palace is famous for the stuccowork on its domes and arches. The Sorgavilasam (Celestial Pavilion) constructed entirely of brick and mortar without the support of a single rafter or girder, is a marvelous example of Indo-Saracenic architecture. Other striking features of the palace are the massive white pillars, several of which line the corridor that runs along the courtyard. These pillars are 20m in height and have a circumference of 4m.

What is the best time Madhurai Meenakshi Temple?

Madurai climate is pleasant and between 20 Degree to 29 Degree C during the months of December to February, with little or no rainfall.

Pureprayer is a leading App based and web based platform offering Puja-Homa-Pariharas and SpiRitual Journeys-Darshan and Puja packages to several important holy and sacred destinations.