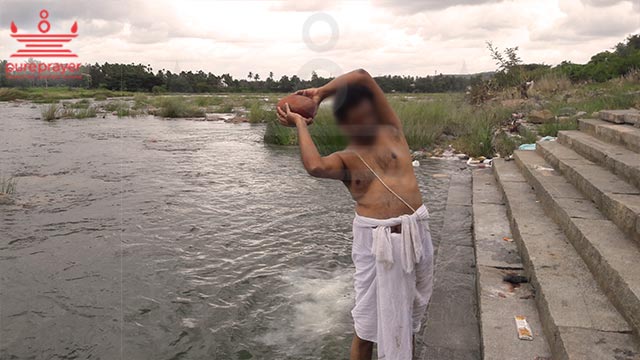 Asthi Visarjan is an important step that needs to be performed as a part of the ten-day Antyeshti ritual after death.

What is Asthi Visarjan?

Antyeshti, Antim Samskar (Sanskar), Antim Naman refer to the Vedic practices of immersing the ashes and remnants to rivers, seas and waterbodies.

The mortal coil of the departed is subjected to fire in the manner prescribed in the scriptures and Grihya Sutras. The remnant bones and ashes are collected in an earthen pot (Asthi-Kalash) as directed by Pandit or Purohit. This is kown as Asthi Sanchayan. Such collected ashes and bones are immersed in waterbodies across India like Ganga, Yamuna, Godavari, Narmada, Sindhu, Kaveri, Kshipra (Shipra) or the Seas. The scriptures mention that such an act can result in the Atman continue to reside in Brahmalokam till the bones and ashes are consumed completely.

Hence, Asthi Visarjan is performed in rivers and streams near important Teertha Kshetras. A few of them have been mentioned here.

Places for Asthi Visarjan in India

Gaya Kshetra is one of the popular Mukti Sthalas in India. Muktisthal of Gaya Vishnupad Kshetra on the banks of Phalgu River is the most sought after place for performing Ancestral rites, Asthi Visarjan, Shraddh Pujas, Pitru Paksha Shradh, Gaya Pind Daan, Shraddh kayra and may other Rituals. Gaya is significant for Asthi Visarjan since Lord Rama performed the Pind Daan ceremony for his father Dasharath in this region. The ashes of the departed are immersed in the waters of the holy Phalgu (Phalguni) River. Devotees from all over visit Gaya Vishnupad Kshetra to perform these rites on the banks of Phalgu River. The Triveni Sangam of Phalgu, Lilajan and Mohana are considered very sacred and takes the Atman to Vaikunth, the abode of Lord Vishnu.

Gaya Kshetra is a well-known destination for Mahalaya Pitru Paksha Sharddha. When you perform Shraddh karya, Pind Daan at Gaya to your ancestors in Gaya Kshetra, Lord Vishnu showers benevolence for generations to come. One can perform rituals like Gaya Shraddha, Preta Shraddha, Gaya Pind Daan, Tripindi Shraddha, Mahalaya Amavasya Pitru Paksha Pujas, Pind daan at Gaya among many others seeking salvation. Performing Shradh and Pind daan rituals or Death anniversary rituals in Gayaji takes one soul to the abode of Lord Vishnu who is the prime deity of the Vishnu Paad Temple.

Pureprayer provides the best Pandiit/Purohit services for a seamless completion of all the Asthi Visarjan rituals in Gaya Kshetra.

Haridwar is hailed as one of the best showcases of Indian civilization and culture. It is also regarded as one of the Sacred Seven Places or Sapta Puri in the Hindu Sanatan Dharma. The name literally translates to “Gateway to Gods,” with Hari-Hara which means Almighty and “Dwar” meaning door. Haridwar is regarded as the entry point to the Hindu religious pilgrimage or Char Dhaam yatra that covers the four places of Yamnunotri, Kedarnath, Badrinath, and Gangotri. King Bhagirath is said to have accomplished the salvation of his ancestors by bringing the river Ganga from heaven at Hardwar. Haridwar is one of the destinations where the Kumbh Mela is held after every twelve years. Ganga or the River Ganges is highly regarded by the Hindu as a holy river that originates at Gangotri in Haridwar.

People from all over India and many other countries come to the river to take a holy dip. This is said to wash away their sins. The ritual of bathing on the banks of the holy river Ganga is believed to cleanse away sins and thereby help to attain moksha or salvation.

There are many Ghats on the banks of River Ganga in Haridwar known for Asthi Visarjan and subsequent rituals performed for the departed in the family. Pureprayer provides the best Pandiit/Purohit services for a seamless completion of all the Asthi Visarjan rituals in Haridwar.

Pureprayer provides the best Pandiit/Purohit services for a seamless completion of all the Asthi Visarjan rituals in Gokarna Kshetra.

Gokarna Kshetra is a beach-town in the confluence of rivers Gangavalli and Aghanashini in the Kumta taluk of Uttara Kannada district in Karnataka State. This also known as the Bhu-Kailasa, Southern Kashi and Rudrapada-Gaya of India. Lord Shiva consecrated by Lord Ganapati here was the Atmalinga given to the demon king Ravan and is popularly known as Mahabaleshwara. The main deity in Mahabaleshwar temple in Gokarna kshetra is Lord Shiva. Gokarna is hence known as the southern Kashi of India and has been popular for many  Homas & Pujas, ceremonies, rituals like Asthi Visarjan, Pind Daan, Mahalaya Amavasya Pitru Paksha Shraddha, Shraddha Pujas, Varshik Shraddh,  Narayana bali Puja, Tripindi Shraddha, Thila Homa and many more. Pujas are being performed by local priest families since times immemorial.

Varanasi or Kashi known is one of the oldest cities and a very important Teertha Yatra destination in India. It is believed that anyone who bathes in the River Ganga attains moksha (Salvation). Varanasi or Kashi is the place where the Hindus have been traveling for ages for many ceremonies like Brahmopadesh (Upanayan) and rituals related to Asthi Visarjan, Pitru Shradh and others. The ashes of the departed are immersed in the river with the Vedic procedure of Asthi Visarjan praying, the Atman (the soul) gains salvation and freedom from the cycle of birth and death. This is helpful in the soul’s journey toward uniting with the Divine Power. Moksha or Salvation means freedom from the cycle of rebirths.

Pureprayer provides the best Pandiit/Purohit services for a seamless completion of all the Asthi Visarjan rituals in Kashi.

Srirangapatna is well known for Homa & Pujas, ceremonies and rituals such as Asthi Visarjan, Tripindi Shradh, Pinda Pradhana, Pind Daan, Masika / Varshika Shraddha, Pitrupaksha Shraddhas performed on the banks of river Kaveri (Cauvery) for the departed near and dear ones.

This region was known as Gautama Kshetra during Vedic age. It is stated in the Brahmanda Purana that, Lord Vishnu settled in this region as Lord Sri Ranganathaswamy to answer the prayers of Kaveri and Sage Gautama.

The confluence of three rivers at Srirangapatna, namely the holy Kaveri, the Kabini and Hemavathi is known as Triveni Sangam. Thousands of people come to Paschima Vahini all through the year for ‘Asthi Visarjan’ or immersion of ashes of the dead. This is believed to give ‘Moksha’ or eternal life to the dead person. This is also the place where Mahatma Gandhi’s ashes was also immersed.

Pureprayer provides the best Pandit/Purohit services for a seamless completion of all the Asthi Visarjan rituals in Srirangapatna Kshetra.

Trimbakeshwar Kshetra or Trayambakeshwar in Nasik is a popular destination for Homas & Pujas, ceremonies and rituals like Asthi Visarjan, Mahalaya Amavaasya Pitru Paksha Shraddh rituals, Narayanabali Puja, Pinda Pradaan, Shraddh, Pind Daan and Masika / Varshika Tithis, Tripindi Shraddh performed for the departed near and dear ones. Trimbakeshwar is a very ancient temple dedicated to Lord Shiva and is among the Dwadash Jyotirlings in India. This temple is located about 28 km from Nashik (Nasik meaning nose) and about 117 km from Shirdi, in the State of Maharashtra.
Godavari River is the second largest river in India and originates from Trayambakeshwar. Maharshi Gautam prayed to Lord Shiva and brought Ganga to absolve himself of sins. Sage Gautama was tricked by a group of Brahmins who created a mythical cow. This mythical cow strayed into Sage Gautama’s fields. When Gautama Rishi tried to shoo her away, she died. As Ganga removed the sins of killing the cow (Gau Hatya), the river came to be called Godavari.

Pureprayer provides the best Pandiit/Purohit services for a seamless completion of all the Asthi Visarjan rituals in Trimbakeshwar Kshetra.

We offer highly hygienic and sanitized Homa Kuteera or Kshetra destinations to choose for a safe and satisfactory puja. We can conduct the puja through a video call or perform puja at a Kshetra on your behalf and send you a video of the puja.

Why is Asthi Visarjan performed?

Antyeshti, Antim Samskar (Sanskar), Antim Naman refer to the procedure of immersing the ashes and remnants to rivers, seas and waterbodies. The scriptures mention that such an act can result in the Atman continue to reside in Brahmalokam till the bones and ashes are consumed completely.

Who can perform Asthi Visarjan?

Generally the son/s of the departed person performs the Asthi Visarjan. If the deceased had no off-springs, then the Karta may be the surviving brother/s or the son in law. PurePrayer offers the services of Pandits, Panthulu or Purohits either in person or in absentia at the specified locations above.

Where can I perform Asthi Visarjan?

How do I book Pandit for Asthi Visarjan?

Please get in touch with the Support Team of PurePrayer for Pandits or Purohits and discuss your needs of your traditions.