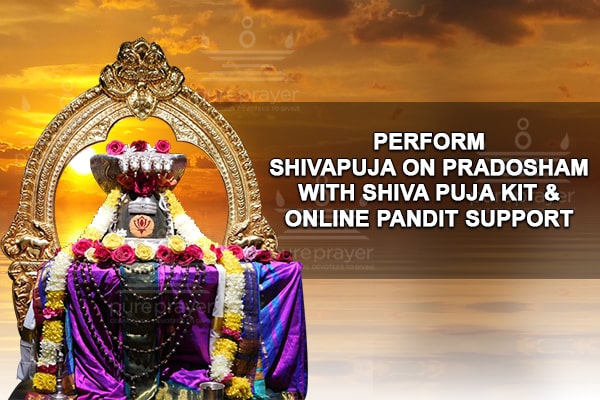 PurePrayer presents an insight into the practices of Pradosha Puja performed during the evenings before sunset on the days with Trayodashi Thithi.

Pradosha Puja is the worship offered to Lord Shiva in the twilight zone on the day of Trayodashi Thithi (13th day of the Hindu Panchangam) that occurs twice every month, seeking his benevolence and grace. Libations are offered to the Shivalingam with different Dravyas (materials like curd, ghee, milk, coconut water and so on) chanting Sri Rudram. Bilvapatra (Wood Apple leaves) Puja is offered chanting the Ashtottara Shatanamavali (108 names). Garlands are offered for decoration.

There are several legends mentioned about the importance of Pradosha Puja in Puranas. It is the time when Gods and Goddesses assemble in the court of Lord Shiva to get a glimpse of his ‘Cosmic Dance’. The most popular is the one about ‘Suchivrat’.

As all the gods and goddesses assemble around Lord Shiva during the ‘Pradosha Kaal’, offering the Puja to Lord Shiva is said to please all the gods and goddesses. Pradosh Kaal is the time when Lord Shiva makes Gauri (Parvati) sit and perform ‘Ananda Tandav’ (cosmic dance) before her. Puranas mention that, he performed this cosmic dance before he drank the poison produced by Vasuki the snake during the Amrit Manthan (Great Churn).

Puranas state that, offering lotus flowers for Pradosha Puja can result in immeasurable wealth for the family that may be enjoyed for generations together. There are many combinations of Pradosha occurring in a year that are said to yield different results. Soma Pradosham occurs on Monday. Bhauma Pradosham on Tuesday. Shani Pradosham occurs on Saturday and so on. These days are considered an excellent time to offer Pujas to Lord Shiva for maximum benefits. Twenty four Pradoshams are observed in the Hindu Panchangam (calendar).

Maharshi Vedavyas has described the Ananda Tandav that takes place during the Pradoshakaal (Twilight) as mentioned below:

Goddess of Vidya (enlightenment) Saraswati plays on her Kacchapi veena. God Indra, the lord of the Gods plays flute. Lord Brahma the creator keeps track of rhythm through Taalam. Goddess Lakshmi herself sings.  Lord Vishnu plays on Mridvangam. All the deities participate in this Pradoshakaal Puja offering obeisance to Mahadeva Shiva.  By offering Pujas to Lord Shiva at this time can therefore lead to the benevolence of all the deities. This is the best way to achieve all the four types of Purusharthas (Achievements to be obtained for a successful life).

Shukla Trayodashi of Maaghamaas occurring in the month of February or March is celebrated as Maha Pradosha Puja.

Somasutra Pradakshnam is a traditional practice of Namaskar (salutations) offered to Lord Shiva. Read on to learn more about the procedure.

Offer prayers to Nandi, the vehicle of Lord Shiva. Start in anti-clockwise route reach the Chandikeshwar (A Gana of Lord Shiva) and offer prayers to him. Care should be taken not to cross Gaumukhi (the viaduct in the sanctum that drains out all the libations). Now it is time to take a clockwise Pradakshina round the sanctum to reach Gaumukhi. After reaching Gaumukhi, head back to Nandi in Anti-clockwise manner. Now, take ‘Darshan’ of Lord Shiva between the horns of Nandi and view the Shivalingam.

This constitutes one Pradakshinam. Three such Pradakshina Namaskars to Lord Shiva makes him very happy and pleases him to core. The path trace looks very similar to the crescent of the moon.  Hence, it is known as SomaSutra Pradakshina.

Magha Shukla Trayodashi (In Tamil – Maasi, In Malayalam- Kumbha Maasa) is a very important and auspicious day that is celebrated with great pomp and glory all across India. It is the day of Maha Pradosh or Maha Pradosham. This time, it is on a Sunday and that makes it very special. During the Pradosha kaal both Sun and Moon may be seen.

This Maha Pradosham, do not forget to visit the nearest Lord Shiva temple and offer your obeisance to Lord Shiva.