Pratipada of Ashvayujamasa marks the beginning of Sharadritu, the harbinger of multi-colored, multi-hued, kaleidoscopic series of celebrations popular as “Sharannavaratri”. Navaratri is in fact the festival celebrated all over India. The season of harvest is also the reason for a season of new hope and rejuvenation. Sharannavaratri is celebrated as a festival, where Good triumphs over evil. The victory of Durga, a representation of the divine Hindu trinity of Brahma the creator, Vishnu the preserver and Shiva the destroyer over many demons is one. Rama ending the rule of Ravan is another. Pandavas led by Krishna ending their exile, are but some of the events celebrated. Triumph of Hanuman crossing the ocean known as “Seemollanghan” is also celebrated during Sharannavaratri. This great festival of India has many colourful regional celebrations taking place from Kashmir to Kanyakumari.

Navaratri or Dussera is celebrated as a “Nada Habba” in Karnataka, based on the practices initiated by kings of Vijayanagar Empire. Mysuru being the Heritage Capital of Karnataka is the center of attraction, for tourists from all over the world. Goddess Chamundeshwari is worshipped. Navaratri is of a great significance and tourists gather to watch this spectacular ten day event that culminates on Vijaya Dashami.

Who can forget the hyper local celebrations of Navaratri in individual homes? ‘Bombe Habba’ or ‘Doll festival’, as fondly called is the festival keenly looked forward to by all young ones. Planning for Navaratri or Dussera begins soon after Ganesha festival in Bhadrapad. This is an event that kindles everyone’s imagination, in planning decorations. The colourful display knows no limits. It could be the faraway Russian doll, Mars rover, parks and great monuments like the palace of Mysore, Vidhana Soudha. The delectable goodies given away to the visiting kids are yet another merry reason for the popularity of the festival.

Sharannavaratri celebrations are begun by setting up the display of dolls on Pratipada. A set of dolls known as “Pattada bombe” are the centre of attraction. These are set up on the top row of the dolls along with many other dolls of gods and goddesses. A ‘Kalash’, comprising of a Panchapatra with five or nine betel leaves is set up on the right hand side of these dolls. A ‘Nandadeep’ is lit and continued for ten days. As per individual tradition, practice of Chandi Parayana, Durga Path or Ramayan rendition is performed during these ten days. Special preparations are offered as “Nivedan” to gods every day. Parayan is concluded on the day ten. Another practice is, beginning the celebrations on the day of Moola Nakshatra with Sarasvati Puja. 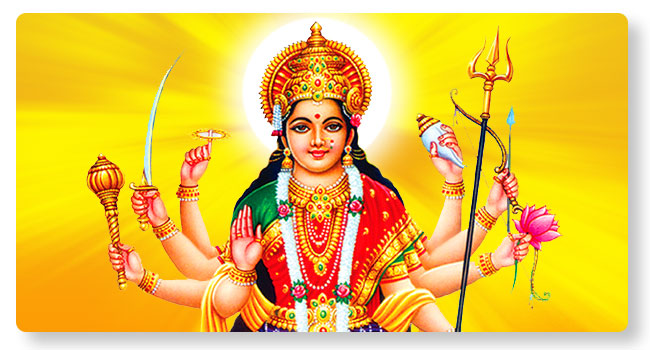