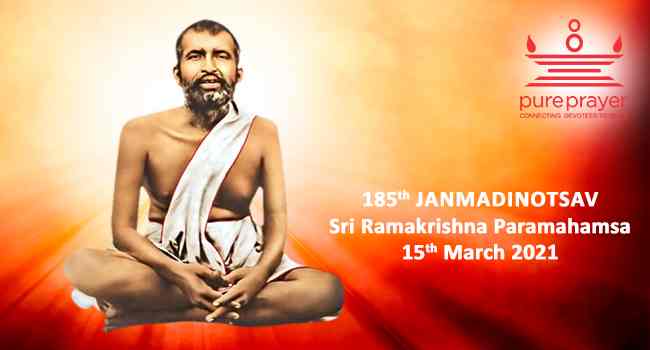 “I was a pet child of my father. He used to call me Ramakrishnababu.”

This was stated by Sri Ramakrishna Paramahamsa himself, which finds a mention in the book of Sri Mahendranath Gupta.

Gadadhar’s whole life was literally an uninterrupted contemplation of God. He reached a depth of Consciousness that transcends all time and place and has a universal appeal. Ramakrishna Paramahams lived as a very intense devotee of Goddess Kalikadevi for most of his life.

Sri Ramakrishna proved that God reveals himself all times and that such trancscendence is not limited to any particular age, country, or people. He did not found any cult, nor did he show a new path to salvation. Sri Ramakrishna did not write any book or deliver public lectures. He chose to speak in a simple language using parables and metaphors drawn from the observation of nature and everyday things. Sri Ramakrishna Paramhansa was a mystic and a yogi who explained complex spiritual concepts lucidly. Ramakrishna was the embodiment of spiritual salvation to troubled souls from all walks of life. As bees would swarm around a blossom, devotees came to Sri Ramakrishna.

He was a key figure in revival of Sanatana Dharma in Bengal at a time when intense spiritual crisis was gripping the province. His most prominent disciple Swami Vivekananda carried on his teachings and philosophy to the world.

His famous maxim, Yato mat, tato path can be stated as: “As many faiths, so many paths”.

Young Gadadhar was sent to the village school to learn, but he was a reluctant student. He loved to paint and create images of Gods and Goddesses. He was attracted to folk and mythological stories which he had heard from his mother. He learnt Ramayana, Mahabharata, Puranas and other sacred literature just by hearing it from priests and sages.

Young Gadadhar loved the nature. From a very young age, Gadadhar was religiously inclined and he would experience episodes of spiritual ecstasy from everyday incidents. Ramakrishna was married to five-year old Sarada from a neighbouring village when he was twenty three years old.

Kali temple at Dakshineshwar was established by philanthropist Queen of Janbazar, Calcutta, Rani Rasamani. Rasamani’s son-in-law, Mathurbabu came across Ramkumar, the elder brother of Gadadhar, in Calcutta and invited him to take up the position of the head priest at the temple. Ramkumar obliged and sent for Gadadhar to join him at Dakshineshwar to assist him in the daily rituals. Gadadhar arrived at Dakshineshwar and was entrusted with the duty of decorating the deity.

Two famous personalities who have experienced Sri Ramakrishna Paramhamsa have said this about him:

“Ramakrishna Paramahamsa is the epitome of the whole.”

“His sayings are not those of a mere learned man but they are pages from the Book of Life.”