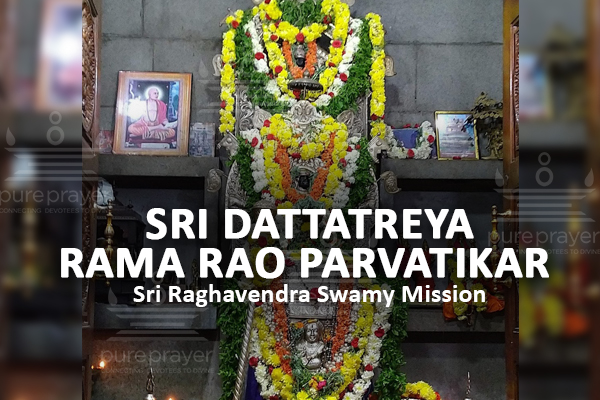 Dattatreya Rama Rao Parvatikar lived in the premises of Badrinath Temple of The Himalayas. He was fondly called Veena Baaba by his spiritual followers. He was born as the second son of Professor Rama Rao Parvatikar and Vatsala Bai on 1916 at Guledgudda, near Badami. He was keenly interested in Indian classical music and was a maestro of Rudra Veena. He invented Dattatreya Veena and was fondly called also as “Veena Baba”. He was a nada yogi and was an expert in Sitar, Vichitra Veena, Rudra Veena and Swarmandal. Alain Daniélou made recordings of his performances between 1950 and 1955 and presented it to the world audience. They are now part of a UNESCO project – UNESCO Collection of Traditional Music of the World. Performances by Sri Parvatikar have been telecast by Doordarshan TV Channel.

Lineage of Sri Dattatreya Rama Rao Parvatikar leads us to the family of Dhanis or Daanis, who were serving the Maratha king, Chatrapati (Kshetrapati) Sri Shivaji Maharaj. His ancestors had obtained the grant of the region around the present Guledgudda for the yeoman service provided during the campaign of Deccan frontier. It is believed that Sri Lakshmi Narasimha Swamy temple was built in Nira Narasimhapura, a place not very far from their native of village “Parvati” by the ancestors belonging to the family of Parvatikars. A Hanuman temple also exists here, where the deity Lord Hanuman was called Parvatesh. He was an ardent worshipper of Lord Lakshmi Narasimha Swamy and always carried his own idol. It was a special image of Sri Lakshmi Narasimha Swamy seated on a throne with Goddess Lakshmi on the left lap and Prahlad on the right.

Sri Dattatreya Ramachandra Parvatikar was born in January 16, 1916 in Hyderabad. His parents, Sri Ramarao Parvatikar and Smt. Sitabai. Sri Ramarao had settled in the then Nizam state of Hyderabad. He was working as the Head of the Department of Chemistry Section in the Nizams College. Smt. Sitabai belonged to the family of Datars. Her father Sri VM Datar was an avid follower of Sri Guru Raghavendra Swamy and often visited “Rayara Brindavana” in Mantralaya. He later took renouncement and assumed the title of Govinda Teertha Maharaj. The Parvatikar family used to visit Mantralaya and stay for a fortnight or more.

Initiation of Sri Parvatikar to Music

Dattatreya completed his education with a BSc Degree in the Nizams College. He was initiated into the field of music at a very early age and learnt Sitar under the tutelage of Sri Prahlad Rao and Nadanand Bapuji of Hyderabad. He had given Sitar performance in Calcutta, Delhi and Hyderabad by the time he was 16. He was recognized by All India Radio (AIR), as a top ranked artiste by 1950. He gave a public performance in Rashtrapati Bhavan before the first president of India, Dr. Rajendra Prasad. He introduced the musical instrument Swarmandal and proved his mastery to the world.

Sri Dattatreya Parvatikar took renunciation during fifties did lot of penance and Sadhanas in the Himalayas and many other holy places. He even practiced Mauna (Penance through silence) for many years.

His bonding with Sri Raghavendra Swamy Mutt was very strong and was residing there for six to seven years from 1950s under the grace and benevolence of Sri Suyameendra Teertharu, who was heading Sri Raghavendra Swamy Mutt Samsthanam. He had set a tough regimen while residing in the Sri Mutt. Waking early in the morning by 3am, He would perform Yoga. He would perform difficult Yogasanas and would offer prayers to Sri Guru Rayaru in Sheershasan. He would take a bath in the flowing Tungabhadra River. He would complete the morning routine of prayers like Dhyanam and Parayanam and practice playing music. He used to perform his cleanse three times a day, as was the norm. He would practice the instruments like Rudra Veena, Swar Mandal or Sitar. Devotees visiting the Sri Mutt would get attracted to his rendition and would spend time listening to the divine music. Dattatreya would visit the Brindavan for viewing Sri Suyameendra Teertha performing Pujas to the deity Moola Rama and Sri Guru Sarvabhauma. After receiving Teertha Prasadam, he would return to his place for further practices of music. He would participate in the evening Pujas and offer music Seva to Sri Guru Raghavendra Swamy in the form of vocal rendition and instrumentals.

Sri Parvatikar also actively participated in literary activities of Mantralaya and helped in bringing out a Marathi version of Sri Raghavendra Charita. In 1975, Dattatreya Parvatikar founded the Shri Raghavendra Mission in Bangalore. He also established Sri Raghavendra Swamy Mission Math in many places across the country.

Sri Dattatreya’s contribution to the Indian music is adored by many experts and connoisseurs of music. He gave a public performance in Rashtrapati Bhavan before the first president of India, Dr. Rajendra Prasad. He evolved an easy to learn method of music. He has published many writings like Sangeet Shiksha, Nad-Anand, Nad-Prabha, Nad-Sudha and many more. He evolved a system by which songs could be rendered in 92,416 Arohas and Avarohas. He made many compositions in different Matras like 91/4, 91/2, and so on. He had many disciples in music. Sri Arvind Gajendragadkar, Sri Harikrishna Shah and Sri RH more were among those lucky ones to learn from Swamyji. He evolved a new musical instrument in 1961 and named it as Dattatreya Veena. One piece of this type of Veena is on display at Sangeet Nritya Academy of New Delhi.

In his memory, a music concert is held every year at Gayan Samaj Bangalore.

Sri Dattatreya Parvatikar laid down his mortal body on October 22, 1990 at Pune.

Sri Matha is at a walking distance (1.1km) from the Vivekananda Metro station (Namma Metro).

Please visit the Temples Section of our webpage to learn more about Sri Raghavendra Mission Matha, as well as Online Booking the Pujas and Sevas performed.