PurePrayer provides best and highly meritorious Pandits, Purohits, Tamil Vadhyars for Purusha Sukta Homam in your homes and other important Kshetras for performing the Homam. You can consult our astrologers for all your Puja needs and to plan the event well in advance. We offer highly hygienic and sanitized Homa Kuteera or Kshetra destinations to choose for a safe and satisfactory puja. We can conduct the puja through a video call or perform puja at a Kshetra on your behalf and send you a video of the puja.

Purusha Sukta Homam is performed to fulfil the desire of begetting a right child. Purusha Sukta homa is advised for couple who are anxious to get a baby. Also for the couple who may be expecting. This homa helps reducing the possibilities pregnancy complications and said to result in healthy and intelligent children like the lord himself.

This Purusha Sukta homam ranks alongside with Putra Kameshti homa and Santana Gopala homa as a Puja offering to beget, healthy and intelligent offspring or successors. Purusha Suktam is glorification of Lord Srihari (Lord Vishnu) that describes the god as omnipresent and omniscient. Since he is the cause for everything, Lord Srihari is worshipped through homa.

Performing Purusha Sukta homam is suggested, if there has been a delay in begetting child. One will be blessed with a child, wealth, property, gain, and prosperity according to Puranas.

Purusha Sukta Homa is a balanced Vedic ritual addressing all problems in life. Purusha Sukta is the essence of all Vedas and is represented in all four Vedas. Performing Sri Purusha Sukta will bring combined blessings of Goddess Lakshmi and Sriman Narayana.

The very “Sankalpam” of this Vedic ritual of Sri Purusha Sukta Homa, itself is special since it addresses both Prakriti and Purusha.

What is Purusha Suktam?

Purusha Suktam is a hymn addressed to supreme consciousness. The hymn was created by Rishi Narayan. Sri Narayana (Lord Vishnu) is the receiver of all sacrifices and is also known as Yagna Purusha. Hence, this Yagna provides all four Purushartha (desire) like, Dharma, Artha, Kama and Moksha.

Purusha Suktam finds mention in the Atharva Veda as well as the Shukla Yajurveda.

Sri Sukta is addressed to Goddess Maha Lakshmi who is the eternal consort of Sri Narayana. She is also called as Mula Prakriti and Sarva Veda Abhimanini, meaning She is the owner of all wealth and knowledge. Know more about Sri Sukta Homam.

You can perform Sri Purusha Sukta Homa in Kshetras and in absentia too.

He envelops the World from all sides (i.e. He pervades each part of the Creation), and extends beyond in all the ten directions.

The Purusha is indeed all this (Creation) in essence; that which existed in the Past, and that which will exist in the Future.

Everything (The whole Creation) is woven by the Immortal essence of the Great Lord (Purusha); by becoming Food of which (i.e. by getting consumed in Whose Immortal essence through surrender) one transcends the gross world (and becomes Immortal).

The Purusha is greater than all the greatness (which can be expressed by words),

His one part has become all these (visible) worlds, and his three parts rest in the immortal world of transcendence.

The three parts of Purusha is high above (in Transcendental Realm), and his one part becomes the creation again and again.

There, in the creation, he pervades all the living (who eats) and the Non-Living (Does not eat).

From him (i.e. the Purusha) was born the Virat; (the Virat came into being) from the presence of the Purusha (Who remained as the background or substratum of Virat);

He (i.e. the Virat) created the Earth, by manifesting her from his own being as substratum.

With the Purusha as the (Sacrificial) Fire, the Deva (Referring to Virat) continued the Yagna (Sacrifice of creation).

The First divine men were created as the holy water sprinkled with the Kusha Grass in that Yagna (Sacrifice of Creation).
The first divine men were the Sadhya Devas and the Rishis, who were created by him. The Deva (Referring to Virat), who performed the Yagna. (These Rishis were not human but divine Rishis like Saptarshis created directly by Virat).

From the complete offering of his (i.e. Virat’s) Yagna (Sacrifice of Creation) was obtained Ghee mixed with coagulated milk, which (i.e. the Ghee and Milk) are (the created) animals, both of Air (Birds) and of Forests (Wild Animals) and Villages (Domestic Animals).

From the complete offering of his (i.e. Virat’s) Yagna (Sacrifice of Creation) was born the Rig Veda and Sama Veda.

From him (i.e. Virat) was born the horses, and all those animals with teeth in both jaws.

From him (i.e. Virat) was born the cows and from him was born all types of goats.

What did the Purusha (i.e. Virat) hold within him? How many parts were assigned in his huge form?

The Brahmanas were his mouth, the Kshatriyas became his arms.
The Vaishyas were his thighs, and the Shudras were assigned to his feet.

His Navel became the ‘Antariksha’ (the intermediate space between Heaven and Earth). His head sustained the Heaven.
From his feet the Earth (was sustained), and from his ears the directions (were sustained); in this manner all the worlds were regulated by him.

By making seven enclosures with three times seven ‘Sacrificial firewood’, the Deva (Referring to Virat) in that Yagna (Sacrifice of Creation), bound the infinite expanse of the Purusha as (apparently) finite living beings (Pashu).

The Devas performed the external Yagna by meditating on the real Yagna (i.e. contemplating on the Purusha who is shining behind everything); and thus they first obtained the Dharma (based on the oneness of the Purusha).

By meditating on the greatness of the ‘Chidakasha’ (Blissful Spiritual Sky beyond everyone, which is the essence of the Purusha), during those earlier times, the spiritual aspirants became the ‘Shining One’ themselves.

Who should perform Sri Purusha Suktam?

Sri Purusha Suktam should be performed by those looking for peace of mind; those who are facing marital issues; those who are wanting to have a successor. It is also considered beneficial for those who are diabetic.

The priests of Pure Prayer perform the Puja as per Vedic rituals based on the date of birth of the individual.

Prasadam will include – Puja tokri with Prasad.

Sri Purusha Suktam should be performed by anyone who is looking for peace of mind, those who are facing marital issues and those who are wanting to have a successor. It is also considered beneficial for those who are diabetic.

Why is Purusha Sukta Homa performed?

Purusha Sukta Homa is performed for spiritual elevation and to find peace of mind.

Pureprayer offers puja and homam services, both in the ashrams and locations of your choice, performed by Vedic scholars who can speak multiple languages, including English, Hindi, Tamil, Telugu, Kannada etc. Aghora homa can be performed at your location by scholarly priests from Gokarna. 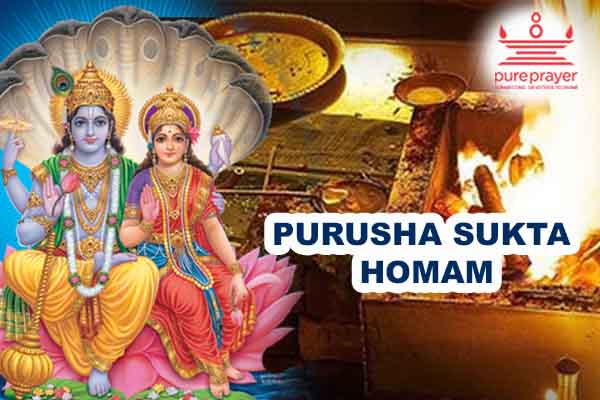