Pavamana Homam
×
You have logged in successfully
Thank You
()
cart 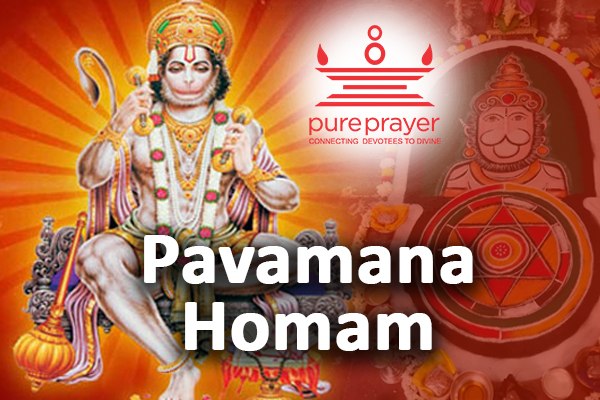 PurePrayer provides best and highly meritorious Pandits for Pavamana Homam or Pavamaan Havan Puja in your homes and offers important Kshetras for performing the Homam or Havan. We can provide Pandit or Purohit services in Bangalore, Mysuru, Hyderabad, Chennai, Kumbakonam, Mumbai and many more cities. You can book the Pandit or Purohit Online with Puja Samagri, suited for your traditions like Bengali, Bihari, Kannada, Maithili, Malayalam, Oriya (Odia), Madhwa, Smartha, Shaiva, Vaishnava Sri Vaishnava, Tamil Telugu, Tulu and many more.

You can consult our astrologers for all your Puja needs and to plan the event well in advance. We offer highly hygienic and sanitized Homa Kuteera or Kshetra destinations, to choose for a safe and satisfactory puja. We can conduct the puja through a video call or perform puja at a Kshetra on your behalf and send you a video of the puja.

Pavamanasuktam is a very famous chant from the Vedic tradition. Pavamana Sooktam is found in the Navama Mandala of Rigveda Samhita that forms a part of Smritis. Pavamanahoma finds mention in Taittiriyopanishat and BruhadAranyaka. It is a very powerful homa that cures the past errors or sins. Consisting of 710 Mantras, Pavamana sukta is about praising Sri Vishnu, Sri Pavamana or Sri Vayudevaru (Hanuman) and Sri Somadeva (Chandra).  Parayan or Chanting the highly sanctified Pavamana Sooktam is said to yield all our desires (Sarvakaamapradaayini). It is often chanted to help clean/refine energy be it in a place or a person. Many times when entering a new house or space of work, this chant was recited to purify the space of its past energy so that a new positive beginning could be commenced. Pavamana Homam is said to be capable of curing sins accumulated due to four Maha Paatakas.

Pavamana Sukta is also used in healing, when dark energy such as past traumas, abuses or impressions from abuse/violence needs to be transformed. Both Listening and learning to chant this can be very helpful in a number of circumstances.

What Pavamana Homa consists of?

Pavamana Homa consists of many Pujas and rituals like Ganapati Puja, Shuddha Punyahavaachana invoking Varuna and Vastoshpati, Panchagavyamelana and performing Avahana, Sthapana and Praana-Pratishthapan of Lord Vishnu or Lord Hanuman. Pavamana Sookta Parayana is performed as desired, Tarpans given and Ahutis are offered to Lord Yajneshwara. This is followed by Brahman Bhojan (Offering food to the participants and visitors). Pavamana Homam may be performed with different Homa Dravyas for different results. Benefits that may be obtained by performing Pavamana Homam have been explained in the set of Mantras known as Pavamana Khila. Those chanting Pavamana Sooktam or performing Pavamana Homam are said to do well for seven births. They would remain prosperous for many generations.

Pavamanahoma is generally arranged and performed on the day of Hanumajjaynti.

Pavamana Sukta Veda Parayanam is performed by a group of scholarly priests, who recite the Vedas, at one’s residence, temples or at a commune (any public place). A session of Parayanam can last from 40mins to 90 mins as per the devotee needs.

Pavamana Sukta Mantras are mentioned in the ninth Mandala of Rigveda. Pavamana Sukta is said to get rid of all sins or bad ‘Karmas’ (treated as a carry-over from past), by just listening to the chanting.

What are the uses of Pavamana Homam?

Who should perform Pavamana Homam?

When Pavamana Homam is performed combining with Sudarshana Homam, you can even get rid of the ill-effects of Vamachara Prayogas like Abhicharam, Maaranam and so on.

When should I perform Pavamana Homam?

Pavamana Homa is to be performed during Saturdays, Ekadashi day (eleventh day of the Hindu calendar) and Purnima (full moon day). You can decide the Date and Muhurtam to perform Pavamana Homam on the basis of your Birth-Chart.

Where should I perform Pavamana Homam?

You may perform Pavamana Homam in your residence for the purposes of good health, cleanse, peace and harmony. This is also performed in many holy Kshetras and temples of Lord Vishnu or Lord Hanuman seeking the grace and benevolence of the presiding deity.

Pureprayer offers puja and homam services, both in the temple and ashrams at dedicated locations, performed by Vedic priests and scholars who can speak multiple languages, including English, Hindi, Tamil, Telugu, Kannada etc. Our services include astro reading, mahurat fixing, explaining the puja proedure and details. Customers will be taken on a call with our astrologers or pandits for a detailed discussion on their puja or homa needs. we also arrange for pujas to be performed at temples, holy kshetras or at your home or location of your choice.

Other Pavamana Homam Materials from Home

Gaya, Hardwar, Kumbakonam, Pajaka, Srirangam and 108 Divyadesam kshetras are suggested for performing Pavamana Homam. This Homam can also be performed in Kshetras dedicated to Lord Hanuman.

Pavamana Homam or Pavamaan Havan in Kumbakonam Kshetra is highly meritorious as this Kshetra is a Navagraha sthalam.

Kumbakonam is very famous as a Temple-Town of Tamil Nadu in the South India. Sri Adi Kumbeshwarar temple is one of the oldest in Kumbakonam. Sri Chakrapani temple dedicated to Lord Vishnu is a must see place of worship. Kumbakonam finds mention in Changa Puranam (Sanga Puranam) and Tevarams.

Srirangapatna is an ancient Teertha Kshetra on River Kaveri located in Mandya district of Karnataka state. Sri Ranganatha Swamy is the presiding deity here and inspiration to many devotional songs. Srirangapatna Kshetra reached primacy during the period of Sri Ramanujacharya, the founder of ‘Vishishtadvaita Philosphy’. Srirangapatna is one among the Tri-ranga kshetras and known as Adiranga. Madhyaranga and Srirangam are the other two.

Srirangapatna is well known for Shraddh rituals such as Naryanabali, Moksha Narayanabali, Tripindi Shradh, Pinda Pradaana, Asti Visarjan, Pind Daan and Masika / Varshika Shraddha performed on the banks of river Kaveri for the departed near and dear ones.

Why is Pavaman Homam performed?

Pavamana Homam is performed to destroy negative energies, for protection against evil eye and evil spirits. It helps to protect from black magic and dark spells. The homa purifies the area and restores positive energy and health.

Which day is good for performing Pavamana Homam?

Pavamana Homa is to be performed during Saturdays, Ekadashi day (eleventh day of the Hindu calendar) and Purnima (full moon day). You can decide the Date and Muhurtam to perform Pavamana Homam on the basis of your Birth-Chart.

We have multi-lingual astrologers and pandits, who speak English, Tamil, Hindi, Telugu, Kannada, Bengali and other languages. Our service includes all puja samagri and pandit charges, our pandits do not charge anything additional beyond what has been agreed upfront.