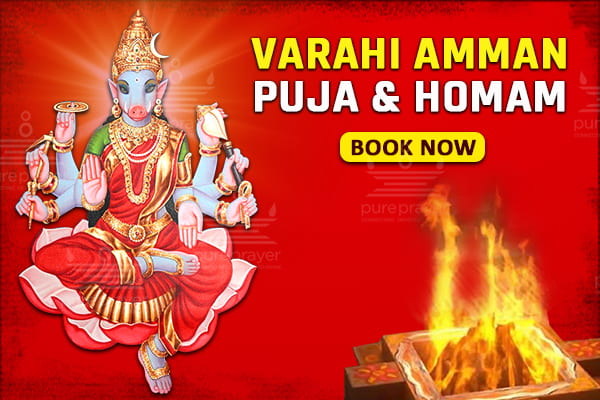 Who is Varahi Devi?

Sri Varahi is also called Dandini a Commander of forces to Goddess Chandika or Durga and part of Dasha Maha Vidyas or Sri Vidya. Varahi is said to reside in 16th Prakaram of the divine Sri Chakram. Varahi is one of Shakti deities known as Sapta Matrikas. They are: Brahmi, Maheshwari, Kaumari, Vaishnavi, Vaarahi, Mahendri and Chamundi. She is also called Panchami as her name occurs in the fifth position of Saptamatrikas. Varahi is described in the Matsya Purana and agamas like Purva-karana and Rupamandana.

According to Varahi Tantra, Varahi has five forms: Chanda Varahi, Mahi Varahi (Bhairavi), Matsya Varahi, Swapna Varahi, and Krccha Varahi. Devi Bhagavata Purana says Varahi, with the other Matrikas, is a creation by the ‘Supreme Mother’.

Markendeya Purana praises Varahi as one who grants boons and reigns in the cardinal direction of North, in a hymn where the Matrikas are declared as the protectors of the directions. According to the ‘Shumbha-Nishumbha Vadha’ part of Devi Mahatyam from the Markandeya Puranam, Saptamatrikas appear as shaktis. Vishnudharmottara Purana describes a six-armed Varahi, holding a Dandam (staff of punishment), khetakam (shield), khadgam (sword) and Paasham (noose) in four hands and showing Abhaya and Varada Mudra in the other two. In other epics, she is described to have human body with eight arms, head of a boar and also having three eyes.  With Kurukalla, she is accorded with a status in Sri-Chakram (Lalita Tripura Sundari). While Kurukalla represents the full moon, Varahi represents the new-moon.

Varahi in Temples of India

Several temples dedicated to Varahi Devi as the main deity are found throughout the India.

An image of Varahi belonging to Sixth Century CE may be found in the cave temple of Rameswaram. Here, she has been depicted with a human face. Varahi (Barahi) temple believed to have been built in Ninth Century CE may be visited at Chaurasi about 14 km from Konark in Orissa state. Ashadha Navaratri or Gupt Navaratri is celebrated as a nine-day festival during the Ashadhamaasam, in honour of Varahi at the Varahi Adhishthanam which forms a part of Brihadeeswarar temple in Tamil Nadu state.  In Varanasi temple, Varahi is worshipped as Patala Bhairavi.

What is Varahi Homam?

The main objective of performing Varahi Homam is to enrich positive energy of the ruling planets and to nullify the negative effects of badly posited planets in the Jatakam (Birth-Chart). It is also a form of remedial measure which has been followed from the ancient times. Varahi Homam is a very powerful homam that protects all, who are facing evil things happening in the life.  Goddess Varahi is the right deity to address the grave problems in life like ill health, black magic, evil eye, inexplicable mishaps in life, fear in performing any task, lack of wealth and status in the society. She destroys evil forces that obstructs the progress and paralyses the enemies. Varahi is described as having a boar form, fighting demons with her tusks.

Who should perform Varahi Homam?

A detailed analysis of your Horoscope chart can be done by our Astrologers to suggest the most suitable remedies or to conduct special Poojas or Homas along with Varahi Homam for specific problems.

Varahi Havan or Varahi Homam is done to negate all the evil forces and evil eye influencing your life. She will bless you with pure thoughts and a hassle free life. This Removes evil or dark negative forces and protects you and your loved ones from mishaps such as accidents. Varahi Homam will bestow wealth and status in the society. Performing Varahi homam helps gain victory over your enemies, dispel fear and bestows courage and confidence.

Varahi Homam is ideal for:

Book and participate in Samoohik Varahi Amman Puja & Homam Online being organized by PurePrayer on December 27, 2022 in Kumbakonam.

You can watch the event Live in our PurePrayer FaceBook page.

Cost of Participation in Varahi Homam: Rs. 600/- per Sankalpa

Please use the link given below for Varahi Homam

Why is Varahi Homam performed?

Varahi Homa may be peformed to overcome the fears and lack of confidence; for victory over enemies and evil dark forces; acquiring wealth and prosperity.

Which day of the week is good for performing Varahi Homam?

When should Varahi Homam be performed?