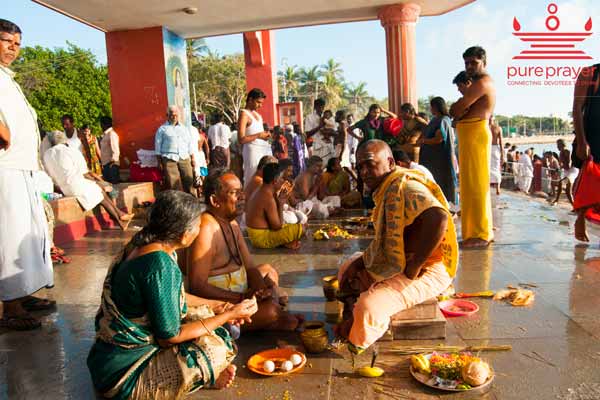 Trimbakeshwar Kshetra or Trayambakeshwar in Nasik is a popular destination for Pitru Paksha Shradh rituals such as Mahalaya Pitru Paksha Shradh, Pinda Pradaan, Shraddh2022, Pind Daan and Masika / Varshika Tithis, Tripindi Shraddh performed for the departed near and dear ones.

Trimbakeshwar Kshetra or Trayambakeshwar in Nasik is a popular destination for Shradh rituals such as Pitru Paksha Shradh (Mahalaya Pitru Paksha Shraddh) at Trimbkeshwar, Pinda Pradaan, Pind Daan and Masika / Varshika Tithis, performed for the departed near and dear ones.

Pitru Paksha is a 16 day period from Purnima thithi in Bhadrapada masa to Amavasya or Sarvapitri Amavasya also known as Mahalaya Amavasya. This is the period during which Hindus pay homage to their ancestors, especially by conducting various ancestral rites along with offerings of food to the deceased ancestors.

Some believe Pitru Paksha to be inauspicious, as death rites like Shradh, Pind Daan or Pitru Tarpan are performed, but it is generally believed to be the time when we seek the blessings of all our ancestors by offering these rituals. The Mahalaya Amavasya is the most important day in Hindu tradition, it is believed that this is the day when Lord Narayana permits all departed souls to visit earth and bless their surviving families with joy and happiness.

You will find the different dates and Shradh Thithis for Mahalaya Pitru Paksha 2022 mentioned below:

A Paksha is of 15 days. Pitru Paksh is extremely important for the Hindu orthodox, as a fortnight of revering their ancestors and clearing their Karmic debts. Hindus perform Shraddha (Thithi) during this fortnight. Pitru Paksh/Mahalaya Paksh rituals are to be compulsorily done, as per the right procedures, by every Dharmik Hindu, annually.

It is interesting to learn that the practice of Pitru Paksha Shraddh got started by Karna of Maha Bharata. Karna reaches Svarga (the heaven) and is happy. When hungry, he asks the gods for food. He is offered jewellery and gold. When he asks them why this he is not given food, they tell him he did not perform any Shraddh and offer food to his ancestors. Karna says he was not aware who his ancestors were. Karna requests for some time grace to go back to earth and perform Shraddha, he is given fifteen days of grace period. This is the time period that coincides with Pitru Paksha ending in Pitru Paksha Mahalaya Amavasya. Many more references can be studied in the scriptures about the importance of Pitrupaksh.

Pitru Paksha Shradh Puja Vdhi varies according to the Hindu tradition being followed. Ashvalayana, Baudhayana, Apastamba are some of the Sutras followed to observe Pitru Paksh Shradh at Trimbkeshwar.

On Pitru Paksha, the Karta performing the Shraaddha puja should wear a white dhoti after taking bath. It is advisable to get the puja done by a pandit, purohith or pujari, as he will know all the chants that are to be uttered during the ceremony.

The ‘Sixteenday’ special period beginning from the Purnima or the day of Full Moon of Bhadrapadmaas is of a very high significance. This period is the time to remember the ancestors or forefathers, who have left for the heavenly abode. Mahalaya Pitru Paksha or Pakshamaas is in fact, the best time in the year to offer the obeisance to the Pitru’s, members of the family and the other relatives, who have passed away to the the other world. Pitrupaksha is the best season for repaying the debts of Pitru Run (Pitrurun in Samskrit). Kanagat 2022 or  Pitru Paksha 2022 will be beginning with Poornima on September 10, 2022. Pitru Paksha 2022 culminates with Mahalaya Amavasya on Spetember 25, 2022.

Narayana Bali Puja or Moksha Narayanabali performed in Trimbakeshwar Kshetra is an important and necessary ritual performed in the name of the departed. Pujas are offered to Lord Narayana in the form of Gadadhar. Narayana Bali Pooja is suggested when the horoscope (birth-chart) shows up Pitru Dosh.

Narayan Bali, a necessary ritual described in Garuda Purana for all cases of abnormal death, is explained as follows: death by fasting, by animals, by accident, by arson/fire, by a curse, or any unusual disease which suddenly caused untimely death.  These rites help the Atma (soul) to liberate and transcend. Narayan Bali consists of the same rituals as a Hindu funeral done to help the souls attain mukti. Vedic Mantras are chanted to invoke such souls. Narayanabali pooja should be performed by those who feel that any of the kin or relatives are deprived of regular annual ceremonies. However, the priest/astrologer should be consulted before deciding to perform.

Tripindi Shraddha Puja / Pitru Paksha Shradh at Trimbkeshwar is a ceremony to offer food and water to the parents and ancestors. Shanti Vidhi of Tripindi  Shraddha is recommended when the regular Shradh have not been performed or discontinued due to various reasons.

This Tripindi Shraddha Pooja is performed with Pind (rice balls) assembled on Vishnu Pada to appease Lord Vishnu in the form of Gadadhar. Tripindi is best performed in Trimbakeshwar Kshetra, as suggested by scriptures.

Performing Asthi Visarjan in Godavari River is considered to be highly meritorious and thought to give Moksh (Salvation) to the departed Atma (Soul). Immersing ashes of departed, in the ‘Asthikund’ adjacent to Ramkund in the river Godavari at Nashik is one of the rituals followed by the Hindus.

Devotees take up many kinds of religious activities like Homas, Shantis and funeral rites, shradh, Tripindi shradh, at Trimbakeshwar Kshetra.

Satvik food (lunch) arranged on request after the pujas and rituals