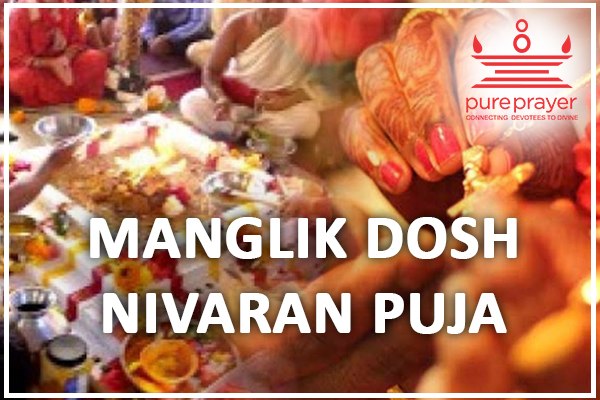 PurePrayer provides the best and experienced Vedic Pandits to perform Manglik Dosh Nivaran Pujas for Mangal Dosha or Kuja Dosha in important and well-known Kshetras, Homa Kuteeras or in the safety of your homes. Perform the Parihara Pujas for Kuja Dosha with best and experienced Vedic Pandits, Panthulu, or Tamil Vadhyars from PurePrayer for Jataka or Kundli related problems known as “Kuja Dosha”, “Manglik Dosh” and as “Chevvai Dosham” in Tamil.  These Pujas are performed seeking the grace and benevolence of Lord Mangal (Angarak).

You can perform these Nivaran or Parihara Pujas in any of these formats: Online-Offline-Remote Format.

Manglik Dosh can be corrected with certain remedies:

Wear the colors of Mars The color associated with Mars is Red. To attract the cosmic energy of Mars, it is recommended to wear red color clothes or keep a red handkerchief.

Mangal Yantras can be installed in home on Tuesday.

In Vedic astrology it is believed there are certain planets that have a malefic effect on an individuals’ life as they are placed unfavorably.

When Mars is placed in the 1st house, 4th house, 7th house, 8th house and 12th house, it is believed it forms Mangal Dosha. If Mars is found in any six of the twelve houses, it causes Manglik Dosh.

Having Manglik Dosh in your horoscope can lead to difficulties in getting married, compatibility issues between couples and delay in finding the right partner. This Manglik Dosh can also lead to hurdles, turmoil, financial loss, professional problems and also separation and divorce from partners.

Manglik Dosh is also called Kuja Dosha. Kuja is another name for the planet Mars. The placement of the planet in an inauspicious manner in the birth chart results in a person being affected by Kuja Dosha.

According to the Brahma Vaivarta Purana, ‘Ku’ means earth and ‘Ja’ means birth. According to the story, Kuja was born out of a coral that was left behind in the ocean by Mother Earth as a token of her togetherness with Lord Vishnu. Kuja is red in color and the presiding deity is Lord Muruga.

When an individual is afflicted by Kuja Dosha it causes a negative impact in the person’s life. The person is aggressive, irritated, angry, volatile, temperamental, dominant, conflicting, competitive, violent, and is prone to injury and disaster.

Kuja Dosha in Each House:

Impact of Manglik Dosh or Kuja Dosha on Marriage

Mangal Dosha or Kuja Dosha is the important criteria that is considered at the time of marriage. At the time of marriage, the compatibility of the birth charts is studied by astrologers and the position of Mars in each chart is analyzed. This helps in determining if the marriage could be a success. When Mars is in the 7th House of marriage and is placed in a malefic manner there are possibilities of trouble in marriage along with constant fighting and discord. The couple endure hardships, which could ultimately lead to a separation or divorce.

If you want to know whether you have Mangal Dosha in your Kundali, you can use Manglik Dosh Calculator. Mangal Dosha calculator is accurate and an effective way of knowing the Dosha.

According to astrologers in South India, the second house is for Mangal Dosha. It is also known as Chevvai Dosham (Sevvai Dosham).

Manglik Dosh Nivaran Puja is performed for people who are seeking to get rid of Manglik Dosha or Kuja Dosha from their horoscope.

When an individual has Mangal Dosha in their birth chart, a Nivaran Puja known as Kumbh Vivah is performed for the person. Mangal Dosha is normally associated with martial discord and people who are Manglik often face marriage problems. Kumbh Vivah Puja is therefore performed to minimize the malefic effects of the planet Mars.

Manglik Dosha Nivaran Puja is performed to negate the malefic effects of the Planet Mars (Mangal) and to rectify the Dosha. Performing a Manglik Dosh Nivaran Puja brings stability in life, removes obstacles, removes problems in married life, and lets an individual live a fulfilling life.

Which day of the week is good for performing Manglik Dosh Nivaran Puja?

Tuesday is the best day to perform Manglik Dosh Nivaran Puja/Mangal Dosha Puja/Kuja Dosha Puja as it is the day dedicated to Lord Mangal.

When should Manglik Dosh Nivaran Puja be performed?

Manglik Dosha Puja should be performed when an individual has Mangal Dosha in their Kundali or are undergoing Mahadasa or Antardasha of the Planet Mars.

What is the procedure for performing Manglik Dosha Puja?

Which are the best Kuja Dosha Nivarana Sthalams?