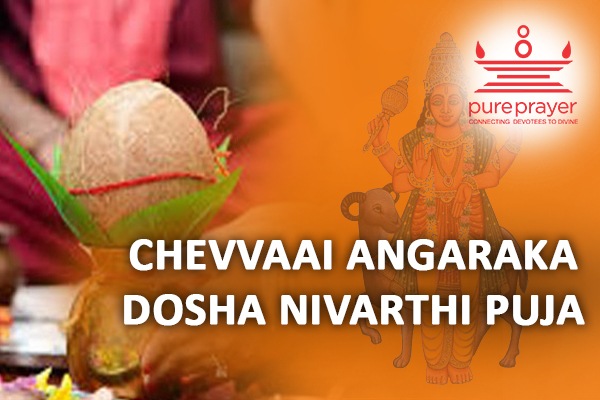 PurePrayer provides the best and experienced Vedic Pandits to perform Sevvai Dosham Parihara Pooja in important and well-known Kshetras, Homa Kuteeras or in the safety of your homes. Perform Parihara Pujas for Sevvai Dosham (Chovva Dosham) with best and experienced Vedic Pandits, Panthulu, or Tamil Vadhyars from PurePrayer for Jataka or Kundli related problems known as “Chevvai Dosham” in Tamil, “Kuja Dosha”, and as “Manglik Dosh”.  These Pujas are performed seeking the grace and benevolence of Lord Mangal (Angarak).

You can perform these Parihara Pujas in any of these formats: Online-Offline-Remote Format.

Brahma Vaivarta Purana says that Kuja (Planet Mars) is the son of the earth. “Ku” means earth and “Ja” means born. He is born as a token of togetherness by Vishnu and Bhudevi. Hence he is also called Bhauma. His color is coral red. Lord Subramanya is considered as the deity to offer Pujas in the case of Sevvai Dosham (or Chevvai Dosham), Kuja Dosham or Angaraka Dosham (Or simply Manglik).

Characteristics of Planet Mars or Chevvai:

Meaning of Manglik is a person with Manglik Dosh or Chevvai Dosham. When Kuja (Planet Mars) is positioned in 2nd, 4th, 7th, 8th or 12th house in the Janma Kundali (horoscope), such a birth-chart is considered Manglik.

Impact of Sevvai Dosham on Marriage:

Sevvai Dosham (Chovva Dosham) is taken into consideration during the time of marriage. Compatibility of charts of the Manappen (bride) and the Manamakan (bridegroom) are to be studied. Position of Mars in the charts are analysed keenly for success of a marriage. When Mars affects the 7th house of marriage in a malefic manner, then the husband and wife could have serious problems, like constant fighting and discord in family life.

Effects of Mars according to Houses in Horoscope:

What are the remedies for Sevvai Dosham?

Vedic Astrology has many suggestions to the Sevvai Dosham (Chovva Dosham) problems in the birth-chart (Jathakam). A few of them are mentioned here. These must be treated only as pointers. You can get in touch with us for a proper study of your horoscope from our Astrological Services.

Vaiththeeswaran Koil, the popular Navagraha kshetra near Kumbakonam, is called Pul Irukku Veloor in ancient Tamil. Pul (ಪುಳ್) means bird which represents Jatayu. As per Ramayana, Jatayu succumbed to Ravana’s injuries and fell down here. The last rites for Jatayu was performed here by Rama Lakshmana. ಇರುಕ್ಕು in Tamil means Rig Veda. The Saptarishis are said have visited here and worshipped Vaidyanatha Swamy as embodiment of Rig Veda.

Thus at this powerful kshetra where Lord Muthukumaraswamy was granted the Vel weapon to vanquish the enemy. A team of traditional priests (Gurukkals) of this temple perform Parihara Poojas for Chovva Dosham.

Performing Parihara Pujas for Sevvai Dosham in Gokarna Kshetra can be highly effective due to the presence of Atmalinga of Lord Shiva.

PurePrayer offers many Parihara Pujas for Sevvai Dosham in important Teertha Kshetras across India suggested on the basis of astrological study of the Birth Chart (Jatakam). Get in touch with our Support team for further details.

What is Kuja Dosha?

Kuja (Planet Chevvai in Tamil) is the son of the earth. “Ku” means earth and “Ja” means born. He is born as a token of togetherness by Vishnu and Bhudevi. Vedic Astrology has identified many different aspects of Sevvai Dosham (Chovva Dosham). They are defined as Partial Kuja Dosha or Anshik Kuja Dosha and Complete Kuja Dosha or Poorna Kuja Dosha. Chovva Dosham can result in financial losses, bad or broken marital relations, failures on many fronts like education, work-business life, or failures in marriage.

How can we reduce the malefic effects of Kuja (Chevvai)?

When Kuja (Planet Mars) is positioned in 2nd, 4th, 7th, 8th or 12th house in the Janma Kundali (horoscope), such a birth-chart is considered Manglik.

How Do I know I am Manglik?

Manglik Dosh or Angarak Dosh can be determined with the study of your Janama Patrika or Horoscope. You can perform a quick check on Manglik Check or Manglik Calculator online.

These Manglik Dosha calculators or Mangal Dosh calculators can help you arrive at whether you really have these astral positions in your Birth-Chart. However, it is always advisable to consult Astrology Services from qualified and expert astrologers, who help you understand and suggest a proper corrective action that can result in blissful life.

What can be done if the placement of Kuja | Angaraka in horoscope is poor or there is presence of Manglik Dosh?

When the devotee has Manglik Dosh or the position of Kuja/Angaraka/Mars in the horoscope is weak, Kuja Rahu Sandhi Shanti Homam can be performed at Vaitheeswaran Koil Kuja kshetra near Kumbakonam. Vaidheeswaran Koil is the popular Angaraka/Mars sthalam in the Navagraha circuit around Kumbakonam. Highly learned Gurukkal Vedic pandits at Vaitheeswaran Koil could perform Kuja Rahu Sandhi Shanti Homam along with Manglik Dosha Nivarana (If any) for the devotee.