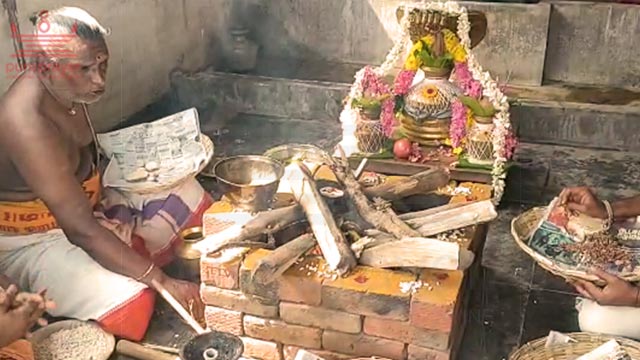 PurePrayer provides best and highly meritorious Pandits for Thila Homam for Pitru Dosha Pariharas and offers important Kshetras across India for performing the Homam. You can consult our astrologers for all your Puja needs and to plan the event well in advance. We offer highly hygienic and sanitized Homa Kuteera or Kshetra destinations to choose for a safe and satisfactory puja. We can conduct the puja through a video call or perform puja at a Kshetra on your behalf and send you a video of the puja.

Thila homam is a Vedic ritual performed to bring peace to souls and comes to the rescue of souls of ancestors and others who may have suffered an unnatural death. This Vedic ritual performed to rid a person from the curse of Pitru Dosha and do away the difficulties that come with the Dosha. This ritual is performed if a family member has passed away due to an accident or an unnatural death and the soul of the departed is not at peace.

Families experiencing and suffering from problems arising due to Pitru Dosha since generations should perform Thila Homam. Performing the ritual brings peace to not just to the unrest souls but also to the families. Thila Homa helps the unrest souls to obtain Moksha.

How different is Thila Homa from other fire rituals or ceremonies?

Thila Homa is different from other Homas. When you decide to perform Thila Homam, you may often face many hindrances. However, it is always suggested to perform the Homam, as this can result in miracles happening in life. Perform Thila Homam and receive the benevolence of your ancestors. Thila Homa is performed after the study of Horoscope by competent astrologers and involves Kushmanda Mantra homa, Sachela Snana for seeking salvation for ancestors.

Importance of Thila in the Hindu religious practices:

Vedic literature such as Boudayana Dharmasutra and Grhya sutra, Jaiminiya Grhya sutra and Garuda Purana refer to the use of black Thila (sesame) seeds. Garuda Purana and Bhavishya Purana throw light about sesame. Sesame seed is associated with Lord Vishnu and Sesame oil (Gingely oil) is associated with his consort Maha Lakshmi. It came out as sweat from the body of Lord Vishnu during the Samudra Manthan (The Great Churn). Hence it is strongly believed that, use of sesame drives away the evil spirits and demons. Sesame seeds are used in Apara Karyas (After-Death rites and rituals). Til oil is also used in funeral rituals. Sesame seed form an integral part of Mahalaya Pitru Paksha rituals.

Til (Sesame) powder mixed with rice is offered to planet Saturn on Saturdays.

Who should perform Thila Homam?

There are many benefits of performing Thila Homa:

Perform a hassle-free Thila Homa with best Vedic and highly experienced Pandits and Purohits from Pureprayer in Gokarna kshetra.

Performing Thila Homa in Gokarna Kshetra can be highly effective due to the presence of Atmalinga of Lord Shiva.

Srirangapatna is well known for Shraddh rituals such as Narayanabali Puja, Thila Homa, Tripindi Shradh, Pinda Pradhana, Pind Daan and Masika / Varshika Shraddha performed on the banks of river Kaveri for the departed.

Book and Perform Thila Homam at Rameswaram with Vedic and experienced Pandits, Purohits and Tamil Vadhyars from PurePrayer in Rameswaram Kshetra.

Thila Homam in Setu Karai Kshetra is highly meritorious as this is also known as Vibheeshana Sharanagati Kshetra, relating to the incident of Lord Rama coming here in search of Sita and building the bridge to demon Ravan’s Swarnalanka. Sethukarai is very near to Rameswaram’ and about 68km or a 90minute ride and 20 minute ride from Ramanathapuram.

Samudra Snanam is an important step after Thila Homam is performed. It is said that, taking a dip in the sea waters of Dhanushkodi with Sankalapm, after Thila Homam can remove 36 types of sins. These sins are said to arise out of non-performance of Pitru Karmas, Pitru Shaap, or due to non repayement of different Runas (Rin).

After the Samudra Snanam, Pujas are performed to Saikata Lingam (Shiva Lingam made of sand on the shores of sea in Rameswaram). The Shivalingam prepared from sand is destroyed after the Shodash Pujas. A portion of sand is collected for offering in the Triveni Sangam (Ganga-Yamuna-Saraswati) of Prayagraj.

Sri Rama Puja is performed to Lord Ram at Dhanushkodi after the Saikata Lingam Puja.

The importance of Dhanushkodi goes back to Tretayug, when Lord Raam built a Setu (Bridge) across the ocean to Swarnalanka in order to defeat the demon king Ravan and bring Sitadevi back. Lord Raam overcame the demon king and gave him salvation on the day of Vijaya Dashami. Also, he made Vibheeshan, brother of the demon king Ravan, the king of Swarna Lanka. Vibheeshan requested Lord Raam to destroy the bridge, in order to prevent any future attempt by demons from attacking the Bharatavarsha. The lord is said to have used the end of his Dhanush (Bow) and destroyed bridge. Hence, the place acquired the name Dhanushkodi according to Puranas.

PurePrayer  offers complete and hassle-free arrangements for performing Thila Homam with Smaudrasnanam in Rameswaram. Please get in touch with our Support team for further details.

Why is Thila Homam performed?

Thila Homam is performed to remove obstacles such as delay in marriage, unhappiness, trouble in having children, late child birth, getting rid of negative energies, delay in finding jobs, frequent illnesses in the family, miscarriages, divorce and separation of couples, legal cases, disputes in family, sudden loss of job, loss in business, loss in finances, accidents, etc. Thila Homam is believed to remove unknown sins and get blessings from ancestors.

What is Pitru Dosha?

Presence of Pitru Dosha can be analyzed by studying your horoscope.

Pitru Dosha could result in troubles such as delay in marriage, finding a job, child birth, disobedient children and illnesses amongst children, matrimonial disputes, disharmony, unforeseen expenses, legal proceedings and accidents are attributed to the suffering soul.

Pitru Dosha denotes ancestral affliction in the horoscope. It mainly occurs when the souls of

Ancestors did not get peace or attain salvation post their death. Such Souls feel extreme hunger and thirst. As they cannot eat anything on their own, they can only accept the offerings given to them during Shradh ceremonies. If water and food has not been offered to ancestors, it could cause adverse reactions. These are said to haunt a person when the ancestors have not been appeased properly through performance of Shraddhas and other rituals appropriately. This is called as Pitru Dosha or ancestral afflictions.

Which day of the week is good for performing Thila Homam?

When should Thila Homam be performed?

What is Thila Homam Procedure?

Ganpati Puja. Lord Surya is worshiped in kalash and mandala. Followed by Gayatri mantra and Pitru Dosha Parihara Mantras are chanted. Kalasha, phal and Ajya Daanams. Then prayers are offered to Yamaraj. Thila Homam and Pinda Pradanam, Pachan of Pind in Agni, taking a Sachela Snan (ritual bath or dip after Puja, Brahman Bhojan). Men wear dhoti and women wear saree with blouse. The clothes worn during the ritual are to be let off in the river after the ritual is completed.

Pureprayer offers puja and homam services, both in the temple and ashrams at dedicated locations, performed by Vedic priests and scholars who can speak multiple languages, including English, Hindi, Tamil, Telugu, Kannada etc.