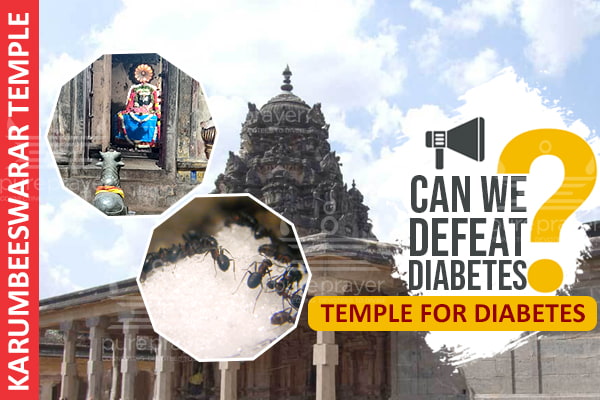 Can We Defeat Diabetes Visiting Temples?

Health is the greatest wealth and when some illness or disease haunts us, the first thing that comes to our minds is praying to the Almighty. While, the modern science has played a helping hand in finding solutions to the health related problems, we do not have solutions to all.

There are many Kshetras and Temples that have been known to have cured diseases and illnesses in India. PurePrayer embarks on SpiRitual Journeys to such a Kovil (Tamil: Temple) that cure diseases.

In Ayurveda, a condition in which a person passes honey like (sweet) urine has been called Madhumeha (Hyperglycemia). Reduced insulin production and decreased insulin sensitivity are the contributing factors for hyperglycemia. It is one among 20 types of Prameha (urological disorder) described in various Ayurvedic classics like Charaka samhita, Sushruta samhita, Ashtanga sangraha, Madhava Nidana, Yoga Ratnakara and many others.

Sushruta was an Indian healer believed to have lived in 6th century BCE, identified diabetes and classified this disorder as “Madhumeha”. The word Madhu means honey and the combined term means sweet urine. Ancient Indians tested for diabetes by looking at whether ants were attracted to a person’s urine.

Venni Karumbeeswarar Temple is located in Kovilvenni, a town near Needamangalam in the district of Thiruvarur. It is 24 km away from Thanjavur of Tamil Nadu State. Karumbeeswarar temple is one of the 276 Paadal Petra Sthalams which has been praised in Tamil Devaaram hymns by saints Thiru Gnanasambandar and Thirunaavukkarasar. It is a Sangam era temple with a known history of at least 2000 years. This is a Swayambhu Lingam and etchings of sugarcane can be seen on the Shiva Lingam here. Lord Shiva is also called as Rasapureeswarar (Sanskrit). Goddess Parvati is called Soundarya Nayaki. Chola King Karikala Cholan is said to have greatly contributed to this temple.

The meaning of Karikala means “the man with Charred legs”. His father Ilamchetchenni died when he was very young. Evil eyes fell on the throne and there was political turmoil in the country. So his enemies captured Karikala and imprisoned him. They also set prison on fire so that Karikala would die. His enemies declared that he was dead but he escaped from the fire and that caused his feet to burn. His feet turned black because of burns.

Karikala Cholan was raised in exile by his mother in this town. He was also known by names such as Karikala Peruvalathan and Thirumavalavan. The dating of his reign has yet to be clarrified as no clear proofs are available. Most agreed date is 190 A.D. Karikala Chola was one of the greatest rulers of Chola dynasty. His reign was during the Sangam era.

The battle of Venni between Karikala Cholan, Pandyan and Cheran empires. Karikala Cholan won the battle and contributed greatly to this temple, as a token of his gratitude to Lord Shiva. The Tamil word Karumbu means sugarcane. Lord Shiva, the presiding deity of this temple is fondly called Karumbeeswarar.

Those suffering from Diabetes, offer a mixture of sugar and Rava or Semolina (wheat grains) sprinkling it around the prakaaram (Outer corridor) of Venni Karumbeeswarar temple. It is believed that, as the ants in this temple eat this mixture, diabetes related suffering reduces. After doing so, sweet Pongal (Sarkarai Pongal) is offered as Naivedyam to the Lord. Abhishekam is also performed prior to all these rituals. Many devotees have witnessed miraculous relief from their diabetes ailment after performing this Parihara Puja in Venni Karumbeeswarar temple.

Many devotees have witnessed miraculous relief from their diabetes ailment after performing this Parihara Puja in Venni Karumbeeswarar temple.