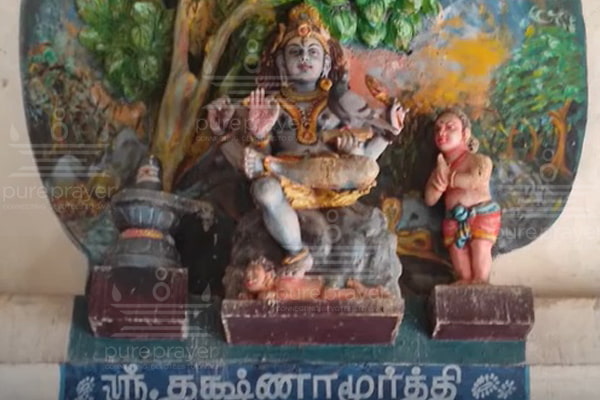 When you visit Kanjanur Agneeswarar Kshetram which is also known as Shukra Graha Parihara Sthalam, do not forget to take a closer look of the young boy at the feet of Lord Dakshinamurthy’s image. This image of the boy is none other than Haradatta Shivachariyar.

Guru Pujai at Kanjanur Agneeswar Kshetram on Shukla Panchamee of Thai Month occurring on February 05, 2022 is celebrated as Aradhana of Haradatta Shivachariyar. This was the day on which the holy man attained Kailasam. Lord Shiva appeared as Dakshinamurthy to the five year old Sudarshana who was a Vaishnavaite boy and imparted the Veda, Aagama Shastras to him. He was renamed as Haradatta Sivachariyar by Lord Shiva.

PurePrayer takes you on SpiRitual Journeys to this Navagraha Sthalam, where Lord Shukran performed a deep, long penance and was granted the secret of Amrit Sanjeevini Mantra from Lord Shiva.

Kanjanoor Kshetram has been an important Center of learning for Shrouddha Shaiva Siddhanta Philosophy due to the great efforts of the expert Shaiva Agama Siddhanti, Sri Haradatta Shivachariyar who lived in the Thirteenth Century CE. Lord Shiva appeared as Dakshinamurthy to the five year old Sudarshana who was a Vaishnavaite boy and imparted the Veda, Aagama shastras to him. He was renamed as Haradatta Sivachariyar by Lord Shiva.

Kanjanur Sri Karpagamba sameta Agneeswarar Kshetram is a very significant ancient Shiva temple situated on banks of River Kaveri (Cauvery) near Kumbakonam. It is one of the 276 Thevaaram Paadal Petra Sthalams where the 7th century Naayanar Saint Thirunavukkarasar sang Tamil hymns in praise of Lord Shiva here. River Kaveri has a unique distinction in Kanjanoor, where it flows from South to North instead of the usual West to East course. It is considered very auspicious to take a holy dip here. Asura Guru or Daitya Guru Shukracharya was granted the status of a Graha (Planet) in Kanjanoor Kshetra in Kumbakonam.

This came to be popular as Navagraha Sthalam, where Lord Shukran performed a deep, long penance and was granted the secret of Amrit Sanjeevini Mantra from Lord Shiva.  . Hence, Kanjanur is the Shukra Graha Dosha Parihara Kshetram of the Navagraha Sthalams around Kumbakonam.

Haradatta Sivacharyar is the most important saint associated with Kanjanur, who lived roughly around 13th century AD. Haradatta contributed significantly to the growth of Shaiva philosophy in Tamil tradition. Haradatta is believed to be an avatar of Vishnu. Kanjanur had the Shaiva-Vaishnava divide during those times.

Haradatta was born as Sudarshana to a Vaishnavaite Brahmin couple. As a toddler, Sudarshana was inclined towards worshipping Lord Shiva. He would remove the Vaishnava Thirumann mark on his forehead and instead apply the sacred ash & rudraaksham of Shiva, much to the annoyance of his staunch Vaishnavaite father. As a 5 year old, his devotion to Lord Shiva only increased. His father ordered that Sudarshana must not be given food nor allowed inside the house if he continues to worship Lord Shiva. Sudarshana spent that night at the Agneeswara Temple after the priest unknowingly locked him inside the premises. Lord Shiva appeared as Dakshinamurthy to the five year old Sudarshana and imparted the Veda, Aagama shastras to him. He was renamed as Haradatta Sivachariyar by Lord Shiva. The Lord blessed him to propagate the Shaiva philosophy to the world. The 5 year old Haradatta was glowing with Vedic knowledge, much to the amazement of his parents. Thus, the idol of Dakshinamurthy at Kanchanur has a rare feature of Haradatta Sivachariyar at His feet.

Haradatta challenged the Vaishnavaites for a debate. They instead wanted to test him by asking him to stand on a red hot iron tripod at the Varadaraja Temple in Kanjanur. He accepted the test. Lord Agneeswara and Goddess Karpagambal appeared and saved Haradatta from getting injured by the hot iron. The village was astonished by this miracle.

How Shivachariyar Relieved the Sin of Gau Hatya

Once a Brahmin in Kanjanur, accidentally killed a calf by unknowingly dumping a bundle of grass on it. He was asked to undertake a Yatra (Spiritual Journeys) to Kashi and take a dip in the Ganga to atone for this Gau Hatya Paapa (sin). The Brahmin was so poor, he couldn’t take a Kashi Yatra. He approached Haradatta Sivachariyar for a solution. Haradatta asked him to take a dip in the North flowing Kaveri at Kanjanur, chant the Shiva Panchakshari Mantra (Aum NamaH Shivay) and offer a little grass to the Nandi idol in the Agneeswarar Temple.

The Brahmin did so and to everyone’s astonishment, the stone Nandi idol started eating the grass. The Brahmin was relieved of the Gau Hatya Paap. Because of this legend, the Nandi idol at Kanjanur temple doesn’t have the tongue sticking out like in all other Shiva temples and instead has a closed mouth because Nandi is consuming the grass.