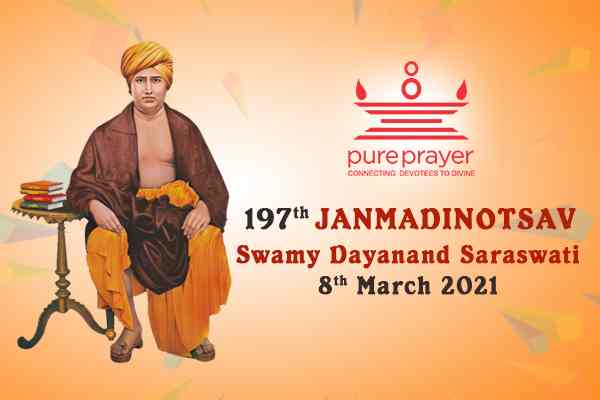 Swamy Dayanand Saraswati formed and founded The Arya Samaj on 7 April, 1875 at Bombay. ‘क्रिण्वंतो विश्वं आर्यम् ‘, a saying in Samskrit is at the heart of the Arya Samaj in its functioning meaning, “Let’s make this world Noble”. Arya Samaj promotes values of life-based solely on the Vedas.

Swami Dayanand Saraswati was a great philosopher, social reformer, and freedom fighter. He was born on February 12, 1824 in Tankara near Morbi, Gujarat State to the devout parents and followers of Lord Shiva. Hence he was named as Moola Shankar Tiwari.

The family being deeply religious, Mool Shankar was taught religious rituals, piety and purity, importance of fasting from a very early age. The Upanayanam or the Yajnopavita Sanskaram was performed, when he was 8 and that initiated Mool Shankar into all the Sanatan Samskar Vidhis.

Once, on the occasion of Maha Shivaratri, Mool Shankar sat awake the whole night in obeisance to Lord Shiva. He saw a mouse eating the Naivedyam (offerings to Shiva) and running over the Shiva Murthy. After seeing this, he questioned himself, if the God could not defend himself against a little mouse then how could he be the savior of the massive world.

Another incident that rocked his mind was the death of his sister when he was 14-year-old. He began asking questions about life, death and the afterlife to his parents to which they had no answers. Mool Shankar was attracted towards the spiritual realm after this.

Mool Shankar was engaged when he was about 20 years old, but he felt marriage was not for him. He left home in 1845 to seek spirituality and find answers to his questions.

After leaving home, Swami Dayanand Saraswati spent 25 years wandering from place to place. He lived an ascetic life and devoted himself to spirituality. He arrived at Mathura where he met Swami Virajananda Dandeesha. During these wanderings, he wrote many articles and books about The Sanatan Hindu Dharma. Satyarth Prakash, Sanskar Vidhi and Yajurved Bhashaym are some of the most popular publications. Swami Virajananda entrusted Mool Shankar with the task of spreading Vedic knowledge and named him Swamy Dayanand Saraswati.

Maharishi Dayanand Saraswati felt the practice of Sanatan Dharma had strayed from its roots over the many centuries and continuous invasions. He felt the four Vedas were the core of religion and should be the base of all practices. Swami Dayanand Saraswati wanted the nation to return to ‘Vedic Living’. Gayatri Mantra and Pranava (AUM) are considered the holiest mantras and should be chanted regularly. Arya Samaj conducts Havans based on Vedic principles.

Swami Dayanand Saraswati preached his thoughts and soon had a large following across India. He also gave the call for Swarajya – freedom. Maharishi Dayanand Saraswati also worked for social equality and more rights for women. He particularly emphasized education for children. He took part in various debates with scholars and religious leaders all over the country which resulted in more and more people accepting his teachings.

Preserving the purity of the faith was of utmost important to him. He strongly advocated the concepts of Sanatan Dharma which he believed to be free from any partiality and as an embodiment of truthfulness. He advocated the concept of Swarajya, meaning a country free of foreign influence, resplendent in the glory of fair and just participants.

Maharishi Dayanand Saraswati went on to establish the Arya Samaj.

On 7 April, 1875 Dayanand Saraswati formed ‘The Arya Samaj’ at Bombay.

The ten tenets of ‘The Arya Samaj’ are as follows:

Movement: Arya Samaj, Shuddhi Movement, Back to the Vedas

Legacy of The Arya Samaj:

When Maharishi Dayanand Saraswati founded the Arya Samaj, he had established Gurukul Schools in at least eight locations in India. These schools were residential institutes and completely free of cost for students. Food, clothes and books were provided for the students. Strict discipline was maintained and teaching included the Vedas, Upanishads and other religious texts. Arya Samaj has more than eight million followers today. Arya Samaj can be visited in Europe. Canada, USA and Australia.

The Arya Samaj is very active not only in India but also in almost all the continents of the world. The United States of America, Canada, Mexico, Australia, United Kingdom, Netherlands, Kenya, Tanzania, Trinidad, Uganda, South Africa, Malawi, Mauritius, Pakistan, Burma, Thailand, Singapore and Hong Kong are some of the countries where The Arya Samaj has its branches.

In 1883, on the occasion of Diwali, the Maharaja of Jodhpur, Jaswant Singh II, had invited Maharishi Dayanand to his palace and sought the Guru’s blessings. he advised the King to forsake the court dancer and pursue a life of Dharma. She conspired with the cook who mixed pieces of glass in the Maharishi’s milk. The Maharishi suffered excruciating pain but forgave the cook involved before death. The tragic death happened on October 30, 1883, at Ajmer, on the day of Diwali.