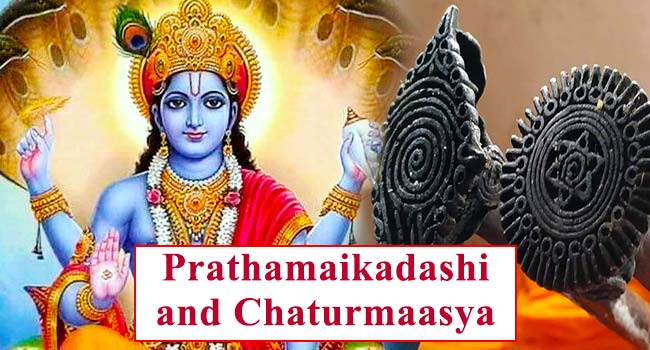 Prathamaikadashi (Meaning: the first Yekadashi) that occurs in the Shuklapaksha (the bright fortnight) of Ashadhamaas marks the beginning of a very important observation in the Hindu Sanatan Dharma. This is the beginning of Chaturmaasya. This also marks a very important time for Vaishnavaites or the followers of Lord Vishnu. From this day on, the saints, seers and Mathadipatis observe staying in one place. Ashadha, Shravana, Bhadrapada and Ashvayuja (Also called Ashvin) form the four months of Chaturmaasya.

Prathamaikadashi or Shayani Ekadashi is occurring on Sunday, July 10, 2022.

Srihari (Lord Vishnu) settles down for a sleep on this day of Prathamaikadashi, which is also known as ‘Ayan Nidra’. This cosmic sleep in the Samadhi state is for a blissful relaxation of the inner self. Scriptures mention a strict diet during this regime. In the first month (Ashadh), leafy vegetables are given up. This is known as ‘Shaaka Vrat’. In the second month (Shravan), all products of curd are avoided. This is known as ‘Dadhi Vrat’. Consumption of milk is stopped during the third month (Bhadrapad). This is known as ‘Payo Vrat’. Pulses are removed from the diet for the fourth month (Ashvin).

Prathamaikadashi brings another important religious activity for the Vaishnavaites. This is known as “Tapta Mudradharana”.

Srihari (Lord Vishnu) settles down for a sleep during this time, which is also known as ‘Ayan Nidra’

Tapta means hot, Mudradharana means receiving seal. In otherwards, receiving a hot stamping. The four attributes of Lord Srihari, Shankh, Chakra, Gada Padma are adorned on the body. This is also known as Vaishnava Deeksha. Peethadhipatis or Yatis of the highest orders sitting in front of the Homagni with these  hot Mudras made of gold and copper applies them as per Sanatan Dharma prescribes. Vaishnava Deeksha has two components. Baahya which is outwardly and the other is Antarya. The “Antarya” is to know Sri Hari as Sarvottama (the supreme conscience). “Baahya” is of stamping mudras which demonstrate the steadfast faith of the devout in Srihari.

Why is Tapta Mudradharana done?

It a very old tradition that also has therapeutic values as it is believed to stimulate the nervous system and provide immunity to the body. Our ancients knew that effect of heated copper when stamped on the human body would cure disease. One of the early cures for jaundice or hepatic disorders was, stamping with heated copper. It is believed that the stamping of these mudras (Shankha, Chakra, Gada, Padma) at specified spots on the human body activate the chakras that lie beneath them.

On the day of Prathamaikadashi, they visit Mathas (religious place) for Tapta- Mudra-dhaarana. Chakra and Shanka Mudras are heated in Homa-Agni and branded on the body. Men have this Mudra on their shoulders and women on their fore-arms above the palms; Chakra right side, Shankha, left side.

Srihari (Lord Vishnu) settles down for a sleep during this time, which is also known as ‘Ayan Nidra’

Mudradharana is significant next to Yajjnopaveetam. It is said that, Adhyayana, the religious education of Brahmachari cannot begin without Mudradharana.