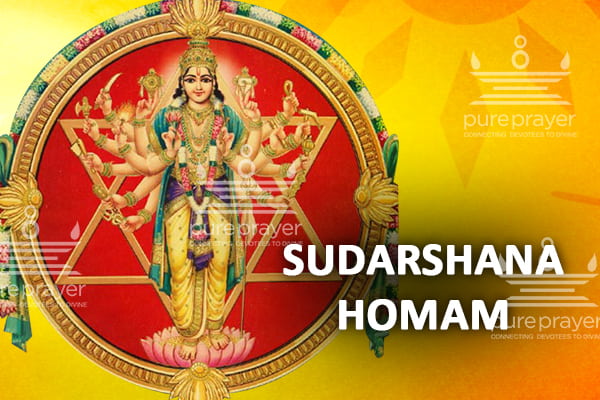 Sudarshana Homa is a fire ritual ceremony dedicated to Sri Vishnu or Sri Narasimha Swamy through his weapon Sudarshana Chakra. Sudarshan Havan can help you ward off the malefic or negative forces, protect you from evil eyes and grant courage to stand up against adverse enemies, bad planetary positions, many more.

Sudarshana Homam is performed to seek the benevolence of Lord Vishnu through his possession of Sudarshana, in the form of deity with 16 hands. “Su” means the right. “Darshana” means vision. When Sudarshan is invoked with prayers, it sets out to fulfil the Ishtakaamya of the devotee. This Homam can remove malefic effects of evil spirits, troubles caused by enemies and witchcraft. Sudarshan Havan is performed for protection from evil eyes; dark malefic forces; success in business, work and life.

In the Ahirbhudhnya Samhita, we can find a mention about Sudarshana. When we suffering from the afflictions caused by incurable diseases, sorcery, or enemies and offer prayers to Sudharsana, he comes in his fierce form to protect. When the last rites of the dead are not performed properly it might sometimes result in the sufferings of the progeny belonging to later generations. Scriptures state that performing the Sudharsana homa could alleviate the sufferings of this nature.

Sudarshan Havan can help overcome obstacles that are blocking your path and reach your goals.

Sudarshana Chakra is a weapon of Lord Vishnu which confronts, cuts and clears the malefic and dark evil forces paving the way for a new start, progress, success and growth.

Earliest mention of Sudarshana Chakra is in Rigvedam. Many Puranas like Brahma Purana, Skanda Purana, Vihnu Purana and others also mention the extraordinary powers of Sudarshana Chakra. Vishwakarma, the architect of Gods is said to have created this Sudarshana from Surya (Sun). It has tremendous power to clear everything that comes in way of obstacles, enemy or dark forces. Lord Vishnu used the Sudarshan chakra during Samurdra Manthan (the Great Churn) to cut through the demon Swarbhanu who then became Rahu and Ketu.

We can find many temples in India, where Lord Sudarshan has been consecrated. Deity is usually with four hands, eight hands, sixteen hands and eighteen hands. Sudarshan is also offered Pujas in the form of the Chakra (disc). Sudarshan Chakra which is also called Neelachakra can be seen in Puri Jagannath Temple. This has been made with amalgamation of eight different metals. This Sudarshan Chakra is fourteen feet in diameter and has eight spokes representing the five elements of nature, mind, knowledge and self. This has been explained by Shwetashvatar Upanishad.

Sudarshana Chakra Pooja is a highly recommended Tantrik solution for many problems.

Salutations to Sudarshana who protects the good, terror for the bad and who destroys evil.

Sudarshan Yantra prepared using sheets of copper, silver or gold and given energy (Read as life) through Pujas in various steps along with Homam and are often used as a protection against the evil or dark malefic forces. They are prepared for personal protection, protection of home, office or business places.

Divya Desam Temples are those Vishnu temples that have been visited & canonised with Tamil hymns by at least one of the 12 Vaishnava Alwar saints between 4th Century AD to 10th Century AD. Naathan Koil is the 16th Divya Desam of the 108 Divya Desams.

You can Book for Samoohik Sudarshana Homam here:

Who should perform Sudarshana Homa or Sudarshan Havan?

Why is Sudarshana Homa performed?

Sudarshana Homam is performed to destroy negative energies, for protection against evil eye and evil spirits. It helps to protect from black magic and dark spells. The homa purifies the area and restores positive energy and health.

When should I perform Sudarshana Homa?

Which day of the week is good for performing Sudarshana Homa?

The best days to perform Sudarshan Homa are Ekadashi, Dwadashi or Paurnami Tithis. If these coincide with Budhvaar (Wednessday) or Shanivaar (Saturday), such days are considered more auspicious.

Where to Perform Sudarshana Homa?

Sudarhana Homa can be performed in your home, Mahavishnu temples or Kshetras like Gokarna, Kumbakonam, Srirangam, Srirangapatna and many more by our PurePrayer professional priests. You can contact our Support team to zero-in on the place to perform Sudarshan Havan Puja. There are other variants to Sudarshana Homam that would have to be performed away from the residences. Sudarshana Ucchatan Homam is one such example.