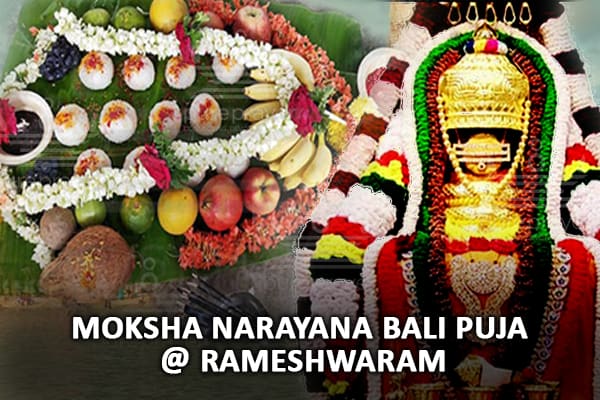 PurePrayer provides best and highly meritorious Vedic Pandits for Moksha Narayana Bali in Rameswaram or NarayanNagbali Puja in Rameswaram Kshetra. You can consult our astrologers for all your Puja needs and to plan the event well in advance. We offer highly hygienic and sanitized Homa Kuteera or Kshetra destinations to choose for a safe and a satisfactory puja. We can conduct the puja through a video call or perform puja at a Kshetra on your behalf and send you a video of the puja.

Moksha Narayanabali is performed for two days. The ritual is performed by families to liberate souls of their departed family members who met an untimely death.

Moksha Narayanabali is performed for the calming of the souls of the departed and to fulfil their desires and thereby address Pitru Dosha. The puja is performed by family members only. Moksha Narayanabali Puja is described in the Garuda Purana. Out of the two main contents of the Garuda Purana, Purvakanda and Pretakanda, the Narayana Bali Puja rites are mentioned in the Pretakanda content

The Narayan Bali Puja is believed to help a person get rid of ancestral curses, also known as Pitru Dosha.

Narayanabali puja is also suggested to get rid of obstacles in business, health problems, education, marriage, accidental death, and also performed to get rid of problems created by curses from mother, father or other family members.

Rameswaram situated in Tamil Nadu State is also a popular Mukti Sthal for the Hindus performing ancestral rites (ceremonies) like Moksha Narayanabali Puja, VarshikSharddh (Barsi shradh), Masik Shraddhas, Mahalaya Amavasya Tarpanams or Mahalaya Pitru Paksha Shradh, Pind daan, Pitru Paksha Shradh at Rameswaram, Pitru-Tarpanam and many other Shradh karmas. Rameswaram is in the Gulf of Mannar. It is connected to the mainland of Southern India by Pamban Bridge.

Dhanushkodi at Rameshwaram is also a place where Asthi Visarjan (last rites) is performed.

Sri Adi Shankaracharya mentions Rameshwaram Kshetra as “Sethubandha” in his famous composition of Dwadasha Jyotirlinga Stotram. The Jyotirling in Rameswaram known as “Ramanathaswamy” or “Rameshwara” and one among the ‘Bada Char Dham Yatra’.

Many People perform Pitru Paksha Shradh at Sethu Karai . Sethu Karai is a holy place in the region known as Vibheeshana Sharanagati Kshetra, relating to the incident of Lord Rama coming here in search of Sita and building the bridge to demon Ravan’s Swarnalanka. Lord Ram built a bridge from Sethu Karai near Rameswaram across the sea to Swarnalanka to rescue his consort Sita from the demon king Ravan. Goddess Parvati consecrated here is called Parvatavardhini. Gandhamadana Parvat in the island of Rameswaram is believed to be a portion of the medicinal mountain, Hanuman carried to Lanka to treat Lakshman who had fainted during the battle.

What is Sarpa Dosh? How it is related to Narayanabali?

It is said that, Sarpa Dosh appears when accidental deaths may have occurred in a person’s family tree of seven generations, either on father’s side or on mother’s side.

How to overcome Pitru Dosha?

Atma of such person who has suffered accidental death can be liberated by performing Narayanbali Vidhi or Narayanabali Pooja, thereby reducing the impacts of Pitru Dosha.

Narayanbali Puja can be performed on these days; Amavasya, Dwadashi, Mahalaya Pitru paksha or Poornima. It can also be performed on important Nakshatram days like Kritika, Vishakha, Punarvasu, Poorvabhadra, Dhanishta, Uttarabhadra, Satabhisha and Revati.

Narayanbali Puja can be performed on any suitable Thithi. The puja should not be performed during Grahan days, Ekadashi, Ashtami and Dashami.

Where to Perform Narayan Bali Puja?

Narayana bali puja is offered at various Teertha kshetras in India like Gaya, Gokarna, Srirangapatna, Rameshwaram, Setukarai, Kashi, Prayag, Trimbakeshwar and many more.  Gaya Kshetra on the banks of River Phalgu, has been a well-known Mukti-Sthal destination for Pitru Karyas and other remedial Pujas from time immemorial. As Gokarna kshetra and Gaya are said to have Rudrapad and Vishnupad respectively, the puja can be performed anytime of the year. Kashi Kshetra on the banks of River Gange is highly suitable to perform these Teertha Vidhis.  Srirangapatna on the banks of River Kaveri is another Teertha Kshetra preferred by the devotees in Karnataka state. Rameswaram and Timbakeshwar being Jyotirlinga Kshetras, are another destination due to the greater availability of Pandits and Purohits to perform many kinds of Parihara Karyas.

What should I wear for performing Narayana Bali Pooja?

This is a traditional worship delineated in Puranas and practiced for many centuries in India with traditional attire of Dhothi for men and sari for women.

What does it cost to perform Moksha Narayana Bali Pooja?