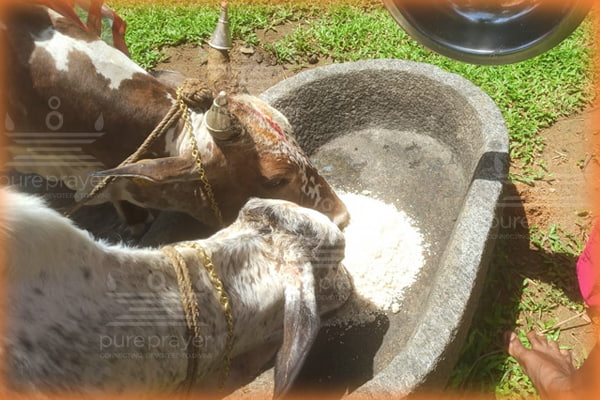 Sanatan Dharma has given the Gau (Cow) a very sacred postion in the everyday life. Gau has been given the same status as mother. Gau Pooja or Go Puja has been prescribed as the everyday procedure in the scriptures. Gau Graasa or Gograsa is nothing but the fodder to be provided to the cows. Feeding cows is said to give us a lot of positive vibrations.

PurePrayer walks you through the journey of performing Gau Daan or Cow Daan, its importance and many cow related Pujas.

Performing Gau Puja, Gau Daan and offering Gau Graasa is capable of removing all kinds of sins. Performing these time-tested, proven rituals with the help of experienced Vedic Pandits, Purohits or Panthulu can be a very satisfying experience in life.

Number of cows in possession represented the financial strength of the empire, kingdom and even the commoners. They were even used as a means of exchange. There are many sacred ones listed in Puranas.

How the cows came to earth?

Gau or cows are said to have descended from the Swargaloka (Heaven) from the holy cow Kamadhenu. Kamadhenu the sacred cow is said to be one of the treasures obtained as a result of Amrit Manthan (The Great Churn). Lord Indra the God of all Gods is said to be the keeper of this Kamadhenu. Kamadhenu means the one who can yield anything desired. Kamadhenu was in the possession of Maharshi Jamadagni and Maharshi Vasishtha and many kings tried to take possession of her from these sages. They ultimately faced dire consequences for their actions. We can recall the incidences of Kartiveeryarjun and Kaushik readily. Kamadhenu plays the important role of providing milk and milk products to be used in her sage-master’s oblations; she is also capable of producing fierce warriors to protect him. Kamadhenu is often addressed by name Surabhi. Surabhi means fragrant, charming, pleasing, as well as cow and earth. Nandini is described as the daughter of Surabhi or Kamadhenu.

What Was The Appearance Of Kamadhenu?

Kamadhenu shows her with the body of a white cow, woman’s head adorned with a Kireet (Crown), colourful eagle wings and a peacock’s tail.

Why the Gau or Cow is considered sacred?

What is Pancha Gavya?

The five products of the sacred Gau or cow are, the milk, the curd, the Ghritam (Clarified butter), the cow’s urine and the cow’s excreta which is also defined as the Labdhi drawing our attention to its medicinal properties and other uses. A mixture of these are used in treating many diseases as per the ancient Granthas (Treatsies) on medicine.

Other legends about the Gau

Devi Bhagavata Purana narrates that Lod Krishna and Radha were once thirsty. So, Krishna created a cow called Surabhi and a calf called Manoratha from the left side of his body, and milked the cow. When drinking the milk, the milk pot fell on the ground and broke, spilling the milk, which became the Ksheerasagar (The cosmic milk ocean). Numerous cows then emerged from the pores of Surabhi and were presented to the cowherd-companions (Gopaalaks). Then Krishna worshipped Surabhi and decreed that cows, the givers of milk and prosperity be worshipped on Bali Pratipada day of Karthikmaas.

Shlokas and Mantras About Gau

There are many Shlokas and Mantras dedicated to the Gau (cow). Kamadhenu stotram is one such Mantra. Cows have been praised in the Vedas and Upanishads. Some of these Shlokas are mentioned below.

Meaning: Oh Gau Maata, please accept this food we are offering to you. Be content with this little offering, as we are weak and feeble to offer any better food. You are always content and shower us with your kindness by giving the elxir like milk. By consuming the milk you provide our Jnana (intellect) and Prajna (conscience) has got better. We acquire wealth and prosperity through you. Please continue your benevolence on us.

Gau Puja can be offered every-day or on days like Guruvaar (Thursday), Shukravaar (Friday). Gau Puja can also be held on days of Janma Nakshatram as a show of gratitude. Cows are offered Pujas on all the Hindu festivals and yield the desires. Shraavanmaas, Karthikmaas, or Makar Sankranti can be such special occasions.

Beautifully decorated cow with her calf is brought to the Puja Sthalam (Venue of Cow Worship). Gau Maata is offered flower garlands, adorned with a Tilak, Haridra and Kumkum to her feet. Naivedyam (Bhog) like rice, jaggery along with water are offered. They are fed with sugarcanes and succulent grass to express the gratitude. Arati is offered to the cow. Parikrama (Pradakshinam going round the cow) is performed. Godhuli, the dirt from the footsteps of the cow are applied on forehead, as this is very auspicious and protects us from evil eye and negative forces. By doing so one may get prosperous and a happy life.

Book and participate in Samoohik Gau Puja Online being organized by PurePrayer in Udupi Sri Kshetra.

You can Book the Pooja using the following Link:

The eatables which are fed to cow is called Gau graasa. It includes sugarcane, grass, jaggery, fruits, vegetables etc. It is believed that feeding cows brings happiness and prosperity in our life.

How Should I perform Gau Daan?

Gau daan and Benefits of Gaudaan

Gau daan is the supreme satisfying service among all donations.  It is sacred and auspicious.  Gau daan is prescribed as a Dosha Nivarna Pooja. One should make efforts to perform Godaan or Go Daanam, once in a lifetime. The Vedic Scriptures state that, Gau daanam should be done along with the calf. This is said to result in health, wealth and prosperity for many generations.

What Types Of Gau Daan Are Suggested?

Many times we will have borrowed financial help or of other nature, from our relatives and friends. For many reasons, the repayment would not have been possible. The help sought could be small or big. Runa Vimochak Gau Daan can help remove these Doshas or sins.

Anaayaasena Maranam… is a part of a saying in Sanskrit. Utkranti Godaan (Gau Daan) is performed to address the problems associated with old age and illnesses that haunt us in life. Utkranthi Gaudaan is performed to prevent pain due to illnesses at the time of death. One can perform these Pujas, especially praying for such a painless death for those who are on the death bed.

Antardhenu Godaan is suggested for a trouble-free after-death journey of the Atman.

Puranas state, Atman (Soul or Spirit) has to travel for a yearlong time and face many obstacles to reach the right destination. To make this journey smooth, Antardhenu godaan is performed.

Vaitari Gau Daan is performed to help the Atma (Soul or Spirit) of the deceased have a safe passage across the Vaitarani, a river flowing before Naraklok (Comparable to the Hell)..

Moksha Dhenu Godaan is performed to attain freedom from Punarjanma (Rebirths) and lead to a respectable life during existence.