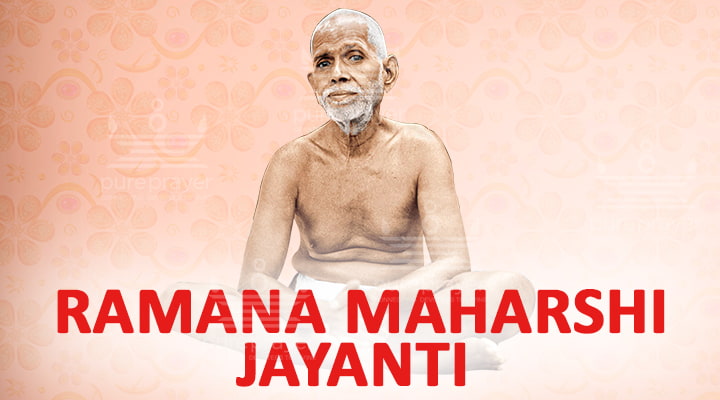 Arudra Darshanam (Ardra Nakshatra Darshanam) is an important festival (Celestial) observed in the Tamil Nadu State. Another important celebration observed on this special day is the Ramana Jayanti or Ramana Maharshi Jayanti. Ramana Maharshi was a great saint and seeker of Truth who took birth in South India.

PurePrayer takes you on a SpiRitual Journey about the life of Sri Ramana Maharshi.

Arudra Darshanam, a festival that commemorates the manifestation of Lord Shiva as Nataraja, the Lord of Cosmic Dance, was being celebrated Bhuminathar Temple situated in Tiruchuzhi, a small village in South India on December 29, 1879. Utsavmurthy of Lord Shiva was being carried in procession through the street that night. The first cry of a baby boy was heard in a house adjacent to the temple, as the procession returned to the temple. The fortunate parents were Sundaram Iyer and his wife Alagammal. The newborn child received the name Venkataraman and was later known as Bhagavan Sri Ramana Maharshi.

Venkataraman’s early childhood was quite normal. He joined others of his age in fun and frolic. When Venkataraman was about six years old he made boats out of old legal papers belonging to his father and floated them in water. When his father reprimanded him, the boy left home. After a long search the priest of the temple found the boy hiding behind the statue of the Divine Mother.

In February 1892, his father died and the family got broken up. Venkataraman and his elder brother went to live with their paternal uncle Subbier in Madurai, while the two younger children remained with the mother.

One unusual thing about him in those days was his abnormally deep sleep. He slept so soundly that it was not easy to wake him up. Those who dared not challenge him physically during the day would come in the night, drag him out of bed and beat him up to their heart’s content while he was still asleep. All this would be news to him the next morning.

The turning point in Venkataraman’s life came spontaneously in mid-July 1896. One afternoon, the youth for no apparent reason was overwhelmed by a sudden, violent fear of death.

The effect of the death experience brought about a complete change in Venkataraman’s interests and outlook. He became meek and submissive without complaining or retaliating against unfair treatment.

Experience of Death in Ramana’s own words

“One of the features of my new state was my changed attitude to the Meenakshi Temple. I used to go there occasionally with friends to look at the images and apply Vibhuti (Sacred Ash) and Kumkum on my forehead and would return home almost unmoved. But after the awakening I went there almost every evening. I used to go alone and stand motionless for a long time before an image of Siva or Meenakshi or Nataraja and the sixty-three saints, and as I stood there waves of emotion overwhelmed me.”

On August 29th, in 1896 while working on a grammar assignment, Venkataraman resolved to secretly leave home. He got up and left the house, making the excuse that he had to return to school. His brother gave him five rupees to pay his college fees, thus unknowingly providing funds for the journey. Venkataraman kept three rupees and left the remaining two rupees with the following parting note:

“I have started in search of my father and in obedience to his command started from here. This is only embarking on a virtuous enterprise. Therefore none need grieve over this affair. To trace this out no money need be spent. Your college fee has not yet been paid.  Rupees two are enclosed herewith.”

Sri Ramana Maharshi stayed at various places in Tiruvannamalai and then in several caves on the Arunachala Hill until he finally settled at what came to be called Sri Ramanashramam where he lived until his Mahanirvana in April 1950.  He never took formal sannyasa nor did he claim to have any disciples. From the day he arrived in 1896 until his Mahanirvana, Ramana never left his beloved Arunachala.

The first place that Ramana stayed in Tiruvannamalai was the great temple. For a few weeks he remained in the thousand-pillared hall. He shifted to an underground vault known as Patala Lingam, where the sunlight never penetrated. A renowned Swami called Seshadri Swamigal sometimes stood guard over Ramana, and drove away the urchins troubling the meditating boy.  The youth was so absorbed in the Effulgence of Bliss that he didn’t even realize when some devotees came, lifted him out of the pit and brought him to the nearby Subrahmanya temple. For about two months he stayed in that shrine paying no attention to his bodily needs.  To make him eat, food had to be forcefully put into his mouth. Fortunately someone was always there to take care of him. Ramana then moved to various gardens, groves and shrines in the vicinity.

His paternal uncle, Nelliyappa Aiyar, from Manamadurai, his best to take his nephew along with him coming to Tiruvannamalai. Alagammal, Ramana’s mother went to Tiruvannamalai accompanied by her eldest son Nagaswamy when Nelliyappa narrated the incident. Alagammal entreated her son to go back with her, but for the sage there was no going back. A devotee who had been observing requested Ramana to write out at least what he had to say.

Ramana started to live in different caves on the slopes of Arunachala. The cave where Ramana stayed longest (17 years), Virupaksha Cave, is on the south-east slope. In the beginning of 1916, Algammal came back to Tiruvannamalai determined to spend the rest of her life with her son Ramana. A little later her youngest son, Nagasundaram followed her. Nagasundaram became a sannyasin, assuming the name Niranjanananda Swami. The end came to Alagammal and attained liberation in 1922. Niranjanananda Swami (Chinna Swami) became the Ashram manager or Sarvadhikari.

Spirituality Centers of India have their own character and line of tradition. Tiruvannamalai (Arunachala) represents the most direct, the most formless and the least ritualistic of paths, the path of Self-enquiry, whose gateway is silent initiation. This is expressed in the old Tamil saying:

“To see Chidambaram, to be born at Tiruvarur, to die at Banaras or even to think of Arunachala is to be assured of Liberation.”

Sri Ramana Maharshi called Arunachala the spiritual Heart of the world. Aruna means ‘red, bright like fire’, does not signify the mere fire that gives off heat. Rather, it means Jnanagni, the Fire of Wisdom which is neither hot nor cold. Achala signifies something that is immovable like a hill. Thus, Arunachala means ‘Hill of Wisdom’.

Tiruvannamalai, situated at the foot of Arunachala, is a town 120 miles southwest of Chennai, an ancient village with a large and splendid temple of Arunachaleshwarar. Yearly festivals draw large crowds of pilgrims to Tiruvannamalai from all over South India during Karthigai (also known as Deepam), which usually falls in November.

At Sri Ramanashramam, the greatest festivals are the anniversaries of the birth and passing of the Maharshi (Jayanti and Aradhana), which fall respectively at the winter solstice and the spring equinox.

Ramanashramam did not develop immediately. At first there was only a shed with bamboo poles and a roof of palm leaves. Dear to Ramana’s heart was in taking care of the cows and feeding people, particularly sadhus and poor people. In the course of time a proper temple, the Matrubhuteswara Temple, was constructed over Mother Alagammal’s burial place and daily Pujas (worship) continue to be carried out.

Ramana never left the Ashram except for his daily walk on the Hill and in Palakottu (an adjacent sadhu colony), morning and evening. In early years, he sometimes walked the the circuit road around the mountain (Giri Pradakshina).

Walking around the Hill is called  Girivalam or Giri Pradakshina. Pradakshina means the act of walking around any holy place in a clockwise direction, with one’s right side facing the object of adoration.

“What cannot be acquired without great pains – the true import of Vedanta (viz. Self-realization) – can be attained by anyone who looks at (this hill). Those who reside within a radius of three yojanas of this place (Arunachala) shall attain union (with the Supreme) which removes bondage even in the absence of initiation.”

On April 14, 1950 it was apparent that his physical end was near. In the evening, the devotees began singing “Arunachala Shiva” (Composition on Arunachaleswara). On hearing it Ramana’s eyes opened and shone. He gave a brief smile of indescribable tenderness. From the outer corners of his eyes tears of bliss rolled down. One more deep breath and no more. At that very moment 8:47 pm, an enormous star is said to have trailed slowly across the sky passing to the north-east towards the peak of Arunachala.

Before Sri Ramana gave up his body, devotees went to him and begged him to remain for a while longer as they needed his help.