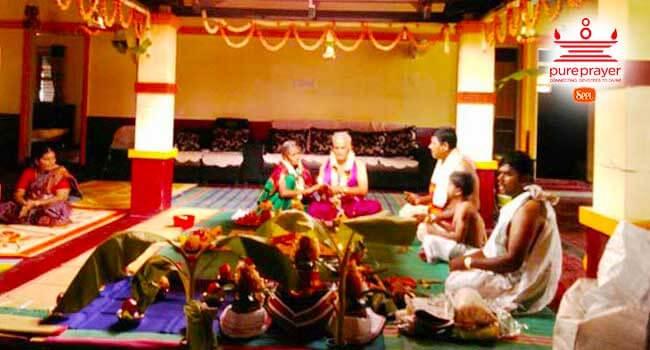 Shantikaryas are the Puja Rituals performed to the Supreme Lord and all the deities Ishta Devata, Kula Devata and the Guru Parampara, thanking them during man’s journey in life. A man’s full life is said to be 120 years. In this long journey through life, several stages are celebrated as auspicious and several Shantikaryas carried out.

Shanti means peace and Shantikaryas are the Puja Rituals which are performed for human well-being. Vedas mention these Pooja Rituals for protection and well-being of an individual at every specific age or stage of life.

Each one of these have specific deities and specific rituals. Each one of these rituals have unique offerings through which one can easily attract the energy of the deity, as well as seek the benevolence and blessings.

Shantikaryas are carried out for an individual reaching the mile stone of fifty years, sixty years, seventy years and so on. The mid-point of sixty years, completion of seventy, seventy five, eighty, ninety and hundred years are venerated. These are celebrated as Ugraratha Shanti, Bhima Ratha Shanti, Vijaya Ratha Shanti, Sahasrachandra Darshan Shanti and Shatamanotsav. By celebrating these special events, their family are blessed with God grace. There are other regional variations in the name of these Shanti Karyas. Vayovastha Shanti is the other name given in the Konkani and Marathi speaking regions. The performer’s desire for good health and happiness are fulfilled performing the Shanti Karyas. All these Shantikaryas are carried out thanking the mother nature in the form of rivers & seas, plants & trees, Dikpalakas (the deities of cardnal directions), Navagrahas  (the nine planet forces) are invoked into the Kalash and pooja offered as per the scriptures. The gods which rule each year of the sixty Samvatsars of Panchangam (The Hindu Calendar) are offered Pujas. Each ‘Ayana’ (uttarayana and dakshinayana), each Rutu (the six Indian seasons), each Maas (The twelve Hindu months), each Paksha (shukla and Krishna Paksha), each Thithi (15 days of the fortnight counted from Pratipada to Paurnami or Amavasya), each day of the week, each Nakshatra (27-nakshatras from Ashvini to Revathi), each Yoga, karana and Rashi Devata are duly and satisfactorily worshipped with Shodashopachar Poojas and Nivedanam. Homa are performed.

Post Homam, Acharyas and Ritviks take the sanctified water from the Kalash and perform Mangala Snan to the Kartru performing the Shanti Karya. Blessings are showered upon the Kartru by all the elderly and Acharya. Acharya and Ritviks performing the Shanti Homam and Pujas are given Daanas expressing the gratitude for their services. Annadaana and offering food to the well-wishers, relatives and friends completes the Shanti Karya Puja rituals.

Bhima Ratha Shanti is performed when the male completes 69 years and enters into the 70th year. The couples worship the lord praying for good health and longevity and offer Pujas, Homas and perform Shanti Pujas to remedy any planetary issues as suggested by the astrologer. Bhima Ratha Shanti is usually performed by the couple’s children or relatives. Bhima Ratha Shanthi (Also popular as 70 years Shanthi) is celebrated by members of the family and relatives by performing Ayul Shanthi homams and Kalasha Abhishekam, which is believed to improve the life longevity of the couple and gives them the strength and good health.  This will also give the couple a boost in their spiritual progress, washing away their past sins and bad Karmas.

Shashtiabdhapoorti or the 60th birthday / marriage anniversary / Ugraratha Shanti is the celebration of completing sixty years based on the Jamna Kundali (Birth Chart) and on the day of birth-star. A milestone in life. As per Vedic scriptures, man’s life span is believed to be 120 years. Sixty years in Sanskrit is known as Shashtiyabdi. Shashtiabdapoorti marks the completion of half the life of one’s lifetime. Hindu calendar system has individual names for sixty Samvatsaras. The occasion of Shashtiabdapoorthi marks the completion of one such cycle. The sages and the rishis of Vedic times have acknowledged the sanctity of the sixtieth year in one’s life and have drawn out elaborate rituals to mark this special event.

The Shasti Poorti celebrations in modern times have two important aspects Shanti and Kranthi. The rituals by Shanthi goes by the norms prescribed in the shastras, while the Kranthi is purely conventional in nature. Yamadharma (God of death) comes riding in a chariot called ‘Ugra Ratha’ at this juncture of sixty years.

Sathabhishekam is an important Shantikarya celebration event performed for good health and longevity of the couple, where the husband has completed eighty years (80) or have witnessed 1000 full moons in their lifetime. It is usually performed after 7 or 8 months post their 80th Birthday, when they become eligible for this ritual to be performed. Shatabhishekam Puja & Homam is performed by the couple’s children or relatives.

When a person reaches ninety years of age as per his Janmakundali, Pujas are offered and Homa is performed and with Sri Suryanarayana Swamy as the deity. Obeisance is offered through Sauri Shanti Homam seeking robust health and mental courage to soon reach hundred and beyond.

The centennial celebration when one reaches 100 years is carried out to appease the gods. When anyone reaches this age, Shatamanotsava Shanti is to be performed. During this Sandhikala, on the day of birthstar, homas, Japas and Pujas are carried out to bless the Jatak. On this occasion, all the gods of sixty Samvatsaras, stars, Chiranjeevis, Kuladevata, Ishtadevata, seven seas, seven sacred rivers, Dwadasha Rudras and Dwadasha Adityas are offered Puja and venerated for their blessings.