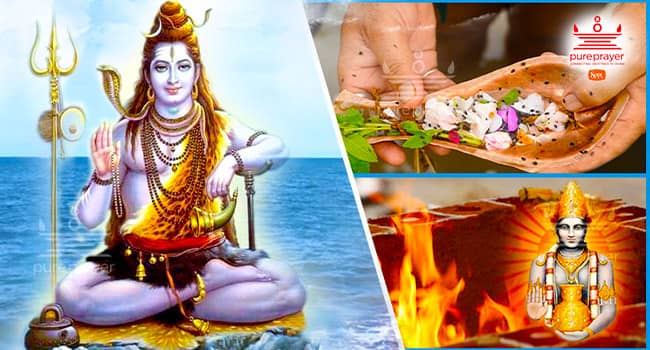 Book and Perform Thila Homam at Rameswaram with Vedic and Experienced Pandits, Purohits and Vadhyars from PurePrayer in Rameswaram and Sethu Karai Kshetras.

Rameswaram is a small island and one of the most important Teertha Kshetras in the Gulf of Mannar. It is connected to the mainland of Southern India by Pamban Bridge. Sri Adi Shankaracharya mentions Rameshwaram Kshetra as “Sethubandha” in his famous composition of Dwadasha Jyotirlinga Stotram. The Jyotirling in Rameswaram known as “Ramanathaswamy” or “Rameshwara” and one among the ‘Bada Char Dham Yatra’.

Many People perform Pitru Paksha Shradh at Sethu Karai also. Sethu Karai is a holy place in the region known as Vibheeshana Sharanagati Kshetra, relating to the incident of Lord Rama coming here in search of Sita and building the bridge to demon Ravan’s Swarnalanka. Lord Ram built a bridge from Sethu Karai near Rameswaram across the sea to Swarnalanka to rescue his consort Sita from the demon king Ravan. Goddess Parvati consecrated here is called Parvatavardhini. Gandhamadana Parvat in the island of Rameswaram is believed to be a portion of the medicinal mountain, Hanuman carried to Lanka to treat Lakshman who had fainted during the battle.

Pujas and Homas at Rameswaram:

Thila homam is a Vedic ritual performed to bring peace to souls and comes to the rescue of souls of ancestors and others who may have suffered an unnatural death. Performing Thila Homam at Rameshwaram Kshetra, Sethu Karai, Gokarna, Srirangapattana, Gaya, Trimbakeshwar and others Thirtha Kshetras are considered very auspicious.

It is stated in Puranas, that such unsettled souls are believed to wander around, constantly disturbing the positive energy and blessings. The spirit or the soul of the dead person would be in a state of limbo and suffering without being liberated.This may result in ‘Pitru Dosh’ that could cause obstacles and troubles for the family of the deceased.

Sarvasta Shanti Pariharam with Thila homam is performed in Rameswaram and Sethu Karai for the benefit of devotees anxious to get 360 degree results in all the spheres, be it the personal health-front, getting progeny, seeking protection, finances, wealth and combating serious long-term illnesses. When performed, it is sure to yield the desired results.