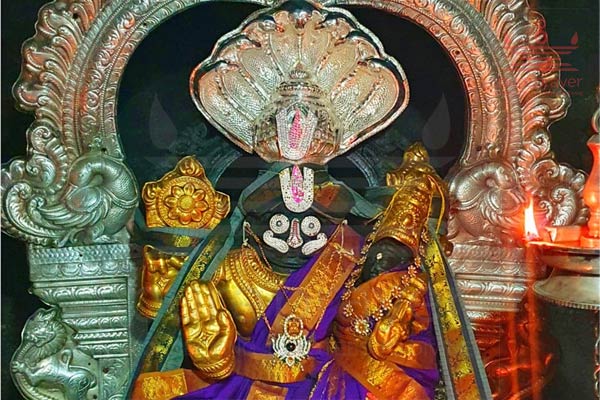 Narasimha Jayanti or Narasimha Chaturdashi is an important festival in the Hindu Sanatan Dharma celebrated on the fourteenth day in the Shuklapaksham (bright fortnight) of Vaisakhmaas with Swati Nakshatram. This year, the festival is slated to take place on May 14, 2022. PurePrayer offers its Bhaktipurvaka Namans to Sri Lakshmi Narasimha Swamy.

According to Vedic scriptures, Lord Narasimha appeared during the Pradosham (when the sun is about to set) on Chaturdashi to slay the demon king Hiranya Kashipu and protect the boy Prahlad. Hence, Puja is performed at this time. Avatar of Lord Narasimha was to remove ‘Adharma’ (the path of wickedness) and bring the world to follow the path of dharma (the path of righteousness).

On this great occasion of Narasimha Jayanti, Pureprayer takes you on the SpiRitual Journey to some old and famous temples of Sri Lakshmi Narasimha Swamy in Karnataka State.

Sri Lakshmi Narasimha Swamy temple of Devarayanadaurga is situated in the foothills of the fortified hills of Devarayanadurga near Tumakuru. The hilly region had many names like Karigiri, Kusumadri, Jadakana Durga, Devarayanadurga is a testimony to the age of the temple and the region. Karigiri name is alluded to another episode in Purana, when Lord Vishnu gave salvation to elephant under attack from a crocodile. This is known as Gajendra Moksha. Aane Bidda Sari (ಆನೆ ಬಿದ್ದಸರಿ) was the name of the region during the reign of Hoysalas. It is believed, that a township existed here then. A large tank named Bukkasamudra was formed during the Vijayanagara empire rule, throwing an embankment across the gorge from which the river Jayamangali flows. Remains of the embankment and of the adjacent town can still be traced.

The region acquired the name of Devarayana Durga, after Sri Chikkadeva Raya Wodeyar of Mysuru kingdom waged a battle and won. Various kings from Wodeyar dynasty are said to have contributed to the upkeep of the fort and temple.  Sri Ranadheera Kanthirava Narasaraja Wodeyar I is believed to have constructed and maintained Sri Bhoga Narasimha Swamy Temple. From the inscriptions numbered Tumkur 41 and 42 (Epigraphia Karnataka), we learn that the enclosure and tower were repaired in 1858 by the Mysore king Krishnaraja Wodeyar III.

Devarayanadurga temples and the fort atop the Karigiri hills are at a height of about 4000ft (Approx.) from the Mean Sea Level. Surrounding regions are declared as Protected Forest Reserve, hence a paradise to wildlife enthusiasts. The flora and fauna in the region is said to have attracted many biologists that includes Dr. Salim Ali (Ornithologist). Highly suitable as Yatra destination & quick retreat from the nearby cities, Bengaluru & Tumakuru. Many amateur and professional trekking groups visit Devarayanadurga to practice hill climbing and rock climbing activites.

Maharshi Durvasa who came to visit Lord Bramha is said to have installed Sri Bhoga Narasimha Swamy after engaging in deep Penance.

Sri Sanjeevaraya or Sanjeeviraya temple is considered the oldest among temple in Devarayanadurga by many experts of history. The deity can be seen carved on the cave wall. Devotees from the surrounding villages visit the Hanuman temple and offer Pujas on Tuesdays and Saturdays. Also on occasions like Purnima and Amavaasya. Celebrations are held on Hanumajjayanti, Sri Rama Navami, Navaratris and many more.

Sripada Tirtha can cure complex and acute skin diseases. Sripada Tirtha is said to have 108 Tirthas within and also has a swayambhu Hayagriva in the cave wall.

When Lord Rama did not have water to put his Tilak on he took his arrow and pierced a rock from where water even today continuously flows. The river that flows from here is called Jaya-Mangali River. It is a confluence of the Jaya and the Mangala Tirthas located on top of the Devarayanadurga mountains.

Both the Yoga and Bhoga Lakshmi Narasimha temples are said to have been located in the center of Ashta Anjaneyas, Ashta Shiva and Ashta Vishnu Kshetras.

The temple, built in the dravidian style of architecture, faces east and is said to have been constructed by Kanthirava Narasaraja I. From the inscriptions numbered Tumkur 41 and 42 (Epigraphia Karnataka), we learn that the enclosure and tower were repaired in 1858 by the Mysore king Krishnaraja Wodeyar III.

Rajagopuram of Sri Bhoga Narasimha temple is noted for its ornamental designs and small carved figures. Another highlight here is the tall Dhwajasthambha (flag mast) of granite. The pillars and the outer walls of the sanctum are adorned with sculptures, small figures and design motifs.

The Moola Vigraha (Main Deity) in the temple of Sri Narasimha Swamy (Avatar of Bhagvan Vishnu) and Goddess Lakshmi is sure to blow away your minds. Also a separate shrine dedicated to Goddess Lakshmi is near the Garbhagriha (Sanctum Sanctorum).

Yoga Narasimha Swamy Temple is located atop the Devarayanadurga Hill. A climb of 100 steps from the road to takes us there. The large temple is famous for its ornate Rajagopuram. The temple complex includes a Parikrama, mantap and a Garbha Griham.

The Kalyani Tirtha (sacred pond) near the temple which is full of water even during summer is known as Narasimha Tirtha. Devotees are allowed to perform holy dip the pond. There are two more ponds in the vicinity.

A small temple dedicated to Garuda, the Vahana or Vehicle of Vishnu, is located nearby.

Devarayanadurga state forest, a 42 sq. km designated spread of jungle protected since 1853. The forest is known to contain an astonishing variety of wildlife, from langur and chital to wild boars, leopards, even the occasional tiger. Surrounding regions of Devarayanadurga are declared as Protected Forest Reserve, hence a paradise to wildlife enthusiasts. The flora and fauna in the region is said to have attracted many biologists that includes Dr. Salim Ali (Ornithologist). Devarayanadurga is the origin for rivers like Jayamangala and the Shimsha River. The hill chains at Devarayanadurga are said to mark the boundary of Krishna and Kaveri river basins.

Sanjeevaraya Temple dedicated to Hanuman is located opposite to Bhoga Narasimha Swamy Temple. The temple is believed to be much older than all the shrines in the Devarayanadurga Hill.

Narasimha jayanti 2022 celebraton of Narasimhavatar takes place during Vaishakha Shuddha chathurdashi (May14, 2022). Generally, thousands of people gather and many pendals are built to serve then with summer drinks like Panakam (Coolers like citrus juices) and buttermilk. However, due to the severe pandemic conditions the event is expected to be a toned down simple affair.

During Rathotsava time, for couples wanting to beget children, there is a special prasada called Garuda Butthi. Many childless couples have begotten children after accepting this Garuda Butthi Prasada.

Sri Laxmi Narasimha Swamy temple of Savandurga is a very famous and ancient temple situated in the foot-hills of Savandurga in Magadi, dedicated the half lion and half human avatar of Vishnu.

The image of Sri Laxmi Narasimha Swamy here is said to breathe and the breathing sound can be heard even to this day.

Sri Lakshmi Narasiha Swamy temple of Savandurga, Magadi is about 54 km from the capital city of Bengaluru in Karnataka state and about 42 km from Tumakuru. Several thousand devotees throng in the temple for Darshan on the day of Vaikuntha even before the day-break. Narasimha Jayanti in Vaishakhamaas is another festive occasion, when devotees throng the temple.

The region developed its name, “Savanadurga” as the rulers in the region were Samants (Vassals) to Hoysala Kingdom. The hilly region rises to about 1226m above the mean sea level. As this offered a great advantage, many kingdoms developed and maintained watch towers and secure places as a defense strategy. Many royal dynasties have patronized and contributed for the development of the temple complex here. Other deity installed here is Sri Savandi Veerebhadra Swamy.

Savandurga is formed by two hills known locally as Karigudda (black hill) and Biligudda (white hill). The hill is considered to be among the largest monolith hills in Asia. The hill rises to 1226 m above mean sea level and forms a part of the Deccan plateau. Rock climbers, cave explorers and adventurers are among others who frequent. Nearby Manchanabele Dam is a nice picnic spot.

Sri Lakshminarasihma Temple is in Balepet, Bengaluru. Earlier, Balepet was being called as Bagilu or the door of Bengaluru. Therefore, people used to call Balepet as Bengaluru Bagilu and the temple of Lakshminarasihma as Balebagilu Narasihma. The temple saw developments during the rule of Yelahanka Nada Prabhu Sri Kempegowda. A stone inscription in the temple premises is said to have been laid during his rule.

According to some elderly people, in the distant past, one night, a person saw the Almighty in his dream who told him that two idols were lying in Suvarnamukhi River in Bannerghatta and that these Vigrahas should be installed. Later, the person who had the dream went to priest Narsimhacharya and narrated the dream. On searching in Suvarnamukhi River, two idols were found. One of them was installed in Bannerghatta and the other one was brought to Balebagilu by the villagers. The idol, which was called Sri Prasanna Lakshmi Narasimha Swamy, was consecrated behind Pillanjaneya Gudi. The idol was three to three-and-a-half feet tall and it was made up of Saligrama Shile. The idol had four hands, Shankha (conch) and Chakra (Disc). One hand embraced Sri Lakshmidevi and the other was Abhayahasta. In the Padmapeetha (Lotus Seat), where Lord Narasimha was installed, Garuda was also present and looked like he was carrying Lord Narasimha.

Narasimha Jayanti 2022 is celebrated during Vaishakha shudha chaturdashi and full moon (pournami) day or on the day of Swathi nakshathra (star). On this particuar day Lord Vishnu took the avatar of “Narasimha”.
In the morning at 5:00 AM Abhisheka will be performed to the lord narasimha. Afterwards Vishesha Alankara Thirumanjana is performed. Alankara thirumanjana means ritual bath will be performed through Shanka (Conch) Nidhi and Padma Nidhi (special type of utensils which contains 1000 holes) to the god with turmeric powder, Kumkum, milk, curd, Honey, Ghee and Tender coconut water. Alankara Thirumanjana seva is the speciality of this temple which will be performed to the god only during Narasimha Jayanthi. There after Vishesha Hoovina Alankara (Special Floral Decoration) and Bhagavada Aradhane will be performed. On this day special manthras will be chanted during the sevas.

The idol of Lord Lakshminarasimha Swamy has been formed from the rock at the back of the temple. However, in the year 1981, a new idol was consecrated in the sanctum sanctorum. The new idol has Goddess Sri Lakshmi sitting in the lap of Lord Sri Lakshmi Narasimha Swamy. It is about four feet in size. A special feature of this temple is the idols of Sudarshana on either side of the main deity. On one side, Sudarshana has six hands and on the other side, four hands.

Sri Lakshmi Narasimha Swamy Vigraha is about four feet in height with four hands and goddess Lakshmi sitting in his lap. In one side of the temple Sudarshan with 16 hands has been installed and on the other side Narasimha Swamy with four hands.  This shrine is also called as “Raksha Sudarshana Narasimha”. The tower on the sanctum (Rajagopuram) and the tower in front of the temple (Vimanagopuram) are in Dravidian style.

Generally, the Narasimha Jayanti festival is celebrated for 10 days in Sri Lakshmi Narasimha Swamy Temple – Malleshwaram. On the 10th day, Pushpa Mantapa Puja is performed. However, due to the pandemic conditions in Karnataka, the events may not be open to public.